The first "G.I. Joe" movie was well-executed, dumb fun. The plot was a little cartoonish, but the action scenes were big, crunchy, and comprehensible. 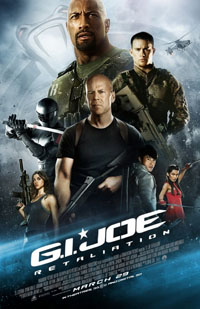 I wanted to enjoy it. I've liked Duane Johnson's film work, and Bruce Willis is always fun to watch, but this film was soulless. The fight scenes had lots of shaky-cam in them, and I never felt like cheering for the protagonists. The plot was a patchwork golem of martial arts revenge, political intrigue, and military fantasy, and throughout the film I felt like scenes had been shoehorned in because somebody thought the movie wasn't cool enough yet.

That strategy, taken to its absurd extreme, would have given us three hours of movie that still wasn't cool enough.

The first act was promising, and while it didn't feel like a G.I. Joe movie, it DID feel like a well-done, near-future military action flick.  Those promises, however, were never delivered on.

Remember how I railed against Olympus Has Fallen for the idea that a system exists to "cancel" a nuclear attack, destroying all our ICBMs in flight? Not only does this movie employ a system very much like that one, EVERY nation with nuclear weapons has a similar system, and all of them are executed with a button-push from the same suitcase that launches the nukes to begin with.

And then, while I was still shaking my head in disbelief, our infiltrating heroes wait until after Cobra has used their orbital super-weapon to flatten London before jumping into action. I still can't wrap my head around how that was presented. Nothing stood in their way but the director, who obviously had some cool special effects he wanted to show off.

G.I. Joe: Retaliation is officially, as of this writing, the least enjoyable movie I've seen this year. Its only redeeming factor is that I saw it with my friend Alan, and we were able to whine, kvetch, and commiserate afterward.