Join Me for D&D on Tuesdays! 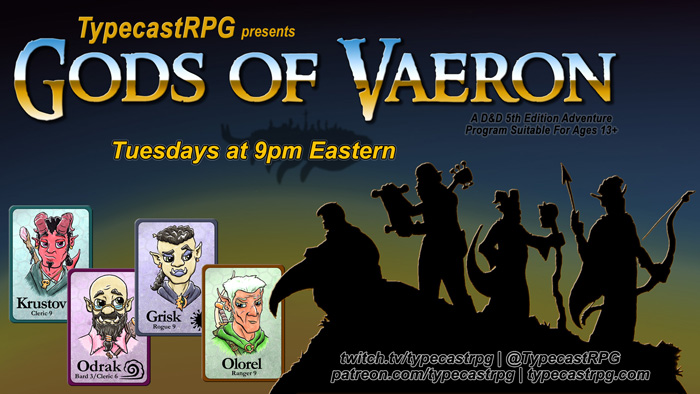 I play D&D on Twitch every Tuesday with my friends Dan Wells, Mari Murdock, Brian McClellan, and Ethan Sproat. As you can see from the picture below, we have an art-cam, so I spend most of the session drawing key moments as quickly as I'm able. Does this make me a less effective cleric? Tune in and see! 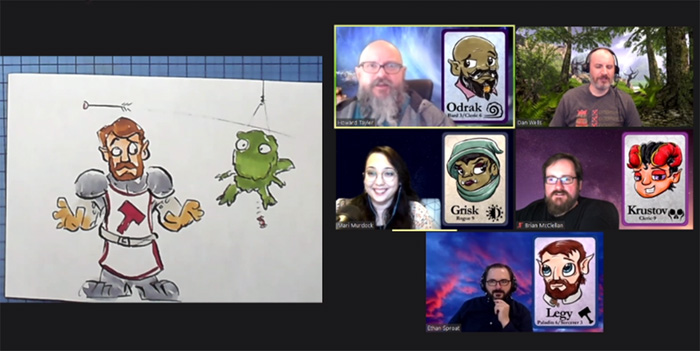 The stream starts at 9pm Eastern each Tuesday night, and previous shows can be found on the TypeCast RPG YouTube channel.

You don't need to start from the beginning! Jump in any old time. This episode might make a nice place to start. If I remember it correctly, it has a T-rex and a cake in it.

NOTE: The illustration above is from an attempted jail-break during Episode 27. Krustov, the necromantic not-that-kind-of-cleric, banished Legy to another dimension in the hopes of getting the guard to rush in and look for holes in the cell. It didn't work, but Legy did get to spend sixty seconds at a piñata party, where he was hit with suction-cup arrows and got zero candy.

Sabbatical notwithstanding, I’ve got work to do. The big project on my plate right now is the BIG DUMB OBJECTS bonus story, tentatively titled “The Big Disassembly,” which shares the TBD acronym with “to be decided.”

The story will be told with big page spreads. I’m doing the preliminary page composition, and Travis Walton is handling the big pieces of art. Then I’m doing the inset panels and the lettering. Here’s what page 2 currently looks like:

And here’s what it looks like if you pull back a bit for the two-page spread:

My friends at TypeCastRPG¹ are hosting a streaming AMA with me at 9pm Eastern on July 28th. You can post questions into the chatroom, so if you’ve ever wanted to ask me something, this is your opportunity.

Aim your browser at twitch.tv/typecastrpg, and have questions ready!

¹Ordinarily we play D&D on Tuesday nights, but one of our players is sick.

When I started creating Schlock Mercenary it poured forth like a dam had broken. I was driven—whether by deep personal need, or demons from the deep, it doesn’t matter—to make comics, and I felt compelled to deliver them daily.

Then there was this thing, this sort of a watershed moment, just fifteen months after I started making comics, in September of 2001…

Lots of us in the webcartooning space sought to express our feelings—of grief, anger, patriotism, fear, it’s a long list— and I realized that my story-based comic strip just wouldn’t work well for that.

So I decided to keep telling the story I was telling.

The only change I made was to amp up the triumph and the funny a bit, because I had this epiphany (or at least this slow dawning of realization) that my job was to help people cope by letting them laugh and cheer. I was still writing social satire (a fact which the dawn of realization didn’t break over until 2008, which stands as strong anecdotal evidence that you can make a thing without knowing that thing’s name) but just because it’s got the word “social” in it doesn’t mean it can’t also have joy, with laughter and cheering. Kind of like how a really long paragraph can be comprehensible, but also have multiple parenthetical phrases slipped into it.

Parentheticals aside, here we are, 19 years after 9-11, and I’ve been doing this job pretty well—or at least very consistently—for that entire time.

But it is now entirely time for me to stop.

I need a break, and it’s the kind of break which, until I take it, I don’t know how long I’ll need it to be.

A break? REALLY? I look at the world around me. I know in my heart of hearts (or perhaps by the yammering of those 1st-paragraph demons) that the world needs joy and laughter and cheering and triumphs in their entertainment just as much now as they ever have.

How can I possibly LET myself stop?

And then I have a pair of epiphanies, which are kind of like dawning realizations, except on a very swiftly-spinning planet—no glow, no warning, just the instant awareness that it’s time to find shade and sunblock.

Epiphany the first: I cannot create enough joy to save the world. If I live a thousand lifetimes, and pack all the work of those lives into this moment, it still wouldn’t be enough.

Epiphany the second: The 20 years of Schlock Mercenary I’ve made won’t vanish just because I stopped making them. If I’m lucky, and the internet keeps furiously pumping words and pictures through tubes, maybe I CAN let myself stop. Maybe, when I take a break, people will still get enough joy to get by.

So I’ll show my demons the door, and then try very, very hard to allow myself some contentment, some satisfaction, with what I have been able to do.

At least for a while.

That door won’t hold for long.

It’s trying to do the job of a dam, and it’s just a door. It won’t be enough.