With the March 8th update we see a return of the uplifted Polar Bear, Captain Landon of J.S.C. Internal Affairs, and I was happy enough with the picture in my head that I laid it out in a manner that would allow for easy conversion to a wallpaper. Within minutes of the strip going live there were people on the Schlock Mercenary Facebook group asking for the wallpaper, so I felt pretty good about my instincts.

I feel pretty good about Travis's coloring on this, too. It's kind of amazing, don't you think?

I've used this image to create three different 1920x1280 wallpapers exclusively for Schlocktroops Patreon supporters. Here's an 800px freebie for everybody (it appears at 500 pixels wide here so that it'll fit.) 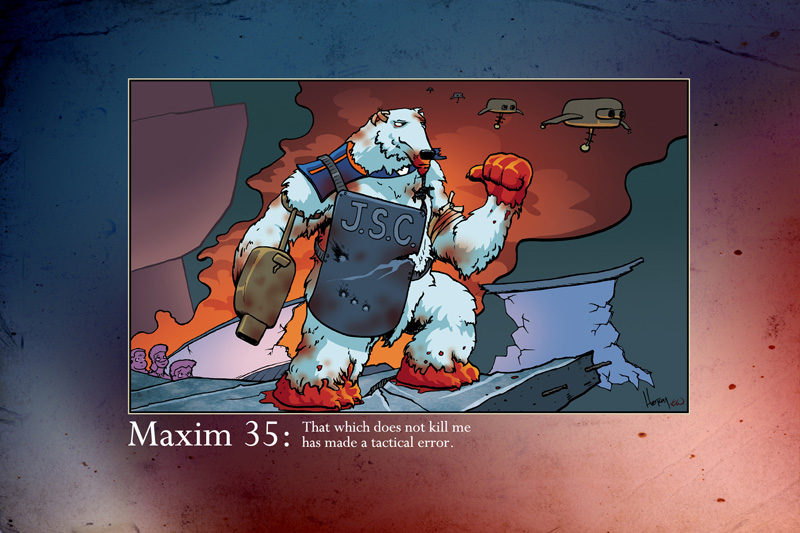 We're going to be cutting away from Captain Landon on Monday, but I promise that he'll put in another few appearances before the end of this month. I do NOT promise that those appearances will be wallpaper-worthy, but I still think you'll like 'em.

If you become a Schlock Mercenary Patreon supporter you'll find more than just these three wallpapers at the Schlocktroops (USD $2.50/mo) level of support. Lots of people don't have room (or even a burning desire) for the merchandise we make, but do want to support us in the creation of Schlock Mercenary. Patreon is a simple way to do this, and we offer digital goodies as gifts for our supporters, along with coupons, and early access to new merchandise.

If every Schlock Mercenary reader became a Schlocktroops patron our society would immediately enter a golden age in which internet comments were safe to read and micropayment models supported entire economies. Also, I would pinch myself and abruptly snap awake.