47 Ronin was not what I expected. I sat down and braced myself for a completely plotless swords-and-sorcery romp with a bit of Asian flair.  What I got was a retelling of the story of the Forty-seven Ronin.

I'm happy with that.

I'm also happy with the fact that Keanu Reeves is not our protagonist. That role is taken on by Hiroyuki Sanada, who totally delivers the goods. 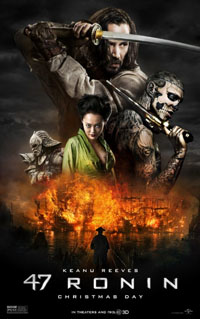 This movie poster is weird. Not pictured:

So the poster is misleading and the trailers are misleading but for me the film didn't suffer at all for that. The poster and the trailers put me in the seat, and then contrary to my expectations I was told a story that was far truer to Japanese culture than American audiences have any reason to expect right now.

It's a powerful story. It didn't need Keanu Reeves or the pirate town, or even the magical stuff to work, but it probably needed those things in order to get greenlit, so I'll take it. 47 Ronin comes in at #13 for me this year, crossing the Threshold of Awesome for good use of effects, not white-washing anything, and not flinching at the end.