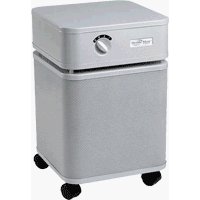 When I plunked down $450 on the Austin Health-Mate air purifier, last week I expected to be disappointed, and to execute the "money back if you're not satisfied" clause. But I was desperate, because my allergies and asthma were as bad as I ever remember them being.

Well, the escape clause will remain un-escaped, much as I'd love to have $450 rattling around in my pocket.

Yesterday my nose ran like a faucet, my lungs sounded like an accordion, and I went through kleenex like I own stock in the company. I doped up on Excedrin PM for a good night's sleep, but in the morning as the meds wore off, I started to go drippy and wheezy again.

Late this morning the Health-Mate finally showed up. I yanked it out of the box, plugged it in upstairs, and got back to work. For two hours I was still a little drippy, but then I noticed a smell, and at about the same time I noticed that I was breathing clearly.

The smell... well, it smells like a really good air-freshener, only not "sticky." What does clean air smell like? Surprisingly, it doesn't smell like "nothing." But it also doesn't smell like whatever allergens have been blowing around inside my house for the last who-knows-how-long. It just smells... clean.

The real test for this sucker will be in April, when the pollen starts a blowin'. If I can wake up in the mornings without the runny nose and watery eyes... ahh, bliss.

I've been spending upwards of $50 per month on allergy treatments for the past four years, and while they've helped significantly, I'm not cured. Spending the equivalent of 9 months of that treatment money on keeping the air clean in the house for five years is worth it.

Yeah, I know. The filter probably won't last that long, and it's a two hundred dollar item. But Austin has a pro-rated usage clause saying that if your last filter does NOT last five years, you don't pay full price on the new one. NICE.

Regardless, it's still worth it.

UPDATE:  the morning of February 8th ...

I woke up without a head full of snot for the first time in recent memory. I did have a little bit of coughing and wheezing right about the time the furnace kicked in, which means that the filter in my bedroom had to play catch-up as the furnace blew fresh crap around the room (yes, we've cleaned the ducts, grills, and central filter), but that little jag only lasted maybe 30 seconds, and then I was back asleep.

Over the next few days we'll be cleaning house, and moving the purifier into the room where we clean -- hopefully chasing down piles of allergens, dust, mold spores, and who knows what else.