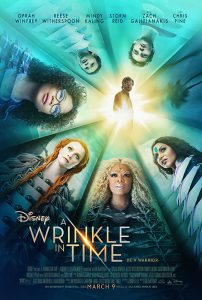 I saw A Wrinkle In Time in the IMAX theater on opening night, and loved it. The film is beautiful, and the younger cast members were absolutely brilliant, especially Storm Reid and Derek McCabe.

The film didn’t have as much explanation of tesseracts  as I hoped it would, but there were several scenes that at least paid homage to the various pop-sci explanations of higher-dimensional math. In particular, the shadows of the rafters against the sloped ceiling of Meg’s room created some interesting patterns. The shadows were not mentioned at all—they just existed, and it made me happy to see that somebody framed the shot to display a lower-dimensional projection of a higher-dimensional object.

Some of the dialog seemed a little “on-the-nose” to me, but it worked on me so I can’t complain. A Wrinkle in Time is only the third film I’ve gotten around to seeing this year, and enters my list at #2, just below my Threshold of Awesome, but well above my Threshold of Disappointment.