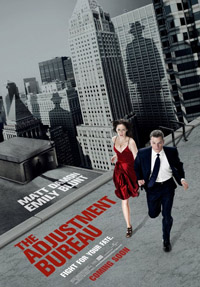 It turns out that The Adjustment Bureau is a far better movie than either of the films I expected it to be.

When I saw the first trailers for the film last year I was frankly offended. It looked like another global conspiracy movie, and while I understand the appeal of those, I believe that the mindset which allows us to accept that flavor of deterministic absurdity is a dangerous one. But that's a different blog post entirely. Suffice it to say that I had zero interest in the film.

Then a friend told me it was based on a Philip K. Dick short story called "Adjustment Team," and it was about a man trying to establish his free agency in spite of interference from agents of (for lack of a better word) Fate, who want to get him back on the plan. I was interested again. The Philip  K. Dick stuff I've read has been some of the most thoughtful, fascinating science-fiction ever.

Then somebody told me the movie was just a romantic comedy with a completely implausible obstacle. My interest waned.

Then opportunity knocked unexpectedly, and my buddy Tim and I decided to pick up a movie together. Waning interest notwithstanding, I figured The Adjustment Bureau was a better bet than Mars Needs Moms. Not yet having seen that particular show I can't say for certain that I made the right choice, but considering how much I loved The Adjustment Bureau I'm going to go out on a limb and say that I did.

Which is kind of what the film is about, when you get right down to it. Agency. Choice. The freedom to take up the reins of your life, crack the whip, and go, even if you don't have enough information to know where exactly you're going. But we don't decide to see movies based on their messages, do we? We choose movies that will entertain us, and if we happen to get immersed in something valuable, that's a happy side-effect.

The Adjustment Bureau is just that sort of movie. It's a great story driven by interesting characters who have powerful motivations. And when you get to the end of it you can't miss the fact that you're wet, head-to-toe, in a message that is worth having been immersed in.