I love playing co-op games with my kids. When I looked at ARK: Survival Evolved (currently in Early Access on Steam) it looked like just such a thing. When I dug into it and learned that I could host a LAN server in my house, and edit The Island to be a bit less deadly and a bit more generous, went all in with my sons.
Before long I had all four of my kids playing with me, and each other.

Currently my girls are the heavy hitters, training mobs of small dinosaurs, and then marching them into harm's way. The game's A.I. spawns some tough beasts, but short of the epic boss battles (which we have not bothered with), and the Alpha T-Rex (which we haven't run into), nothing stands for long against Keliana's swarm of dilophosaurs and dimorphodons, or Gleek's hopping mob of giant frogs.
Keliana and I did run into a bit of trouble with our expedition from the north-east river mouth, but that wasn't her fault. I shall now tell you about it.
We  attempted to bring 24 tamed dinos and one tricked-out crafting raft southwest through narrows and swamps. We discovered, after it was too late to turn around, that the size of our mob and the size of our raft made the trip extremely tedious. It didn't get dangerous until I got fed up and decided on a side trip.
My plan was simple. Ride Terry, my pteranodon who kept fouling the raft's travel, from our mob's location at the western edge of the Eastern Plains east and south to a platform we'd been building in the middle of the Eastern Forest. There he'd be high, dry, and safe. I would then parachute back, timing my glide to get me most of the way to safety. It's a high platform, and I'd seen my son make that kind of glide before.
(Note: The logic that goes "I saw my son do a thing in a game so it is a thing I can now do" has never gotten me into trouble before, I swear.)
A dimorphodon named Zed was following me and Terry. Unfortunately, Zed fell behind, and I forgot he was there. I landed Terry safely, lined up my jump, and leapt back the way we'd come. My chute popped perfectly, and my glide was going to be LONG. Then Zed caught up, flew straight at me, and fouled the lines of my chute.
I dropped fast. Not killed-by-the-fall fast, but definitely short-of-my-goal-by-80% fast. I landed in a boulder-filled vale just to the west of the platform. The vale's only other major feature besides boulders was hungry carnivores. I emptied my shotgun into a 'raptor, then finished it off with a pike only to discover that a carnotaur had stopped quarreling with a pair of sabertooths, and was charging me.
Carnos charge in straight lines, and turn poorly. I used the terrain to my advantage, and attempted to lead him back into his sabertoothed foes. It worked perfectly, except for the part where they decided to share a meal. I now had three carnivores chasing me.  I almost ran headlong into another sabertooth, but it leaped and I ducked, and then I kept running.
" Keliana, where are you?"
"North of that purple light. There's a cliff between me and you. You'll need to go around it."
I turned and checked to see how close pursuit was.
I screamed.
The game does a really good job of getting predators right. They don't roar or screech unless they're fighting. They come at you teeth-first, and quietly.
I had a perfect view of three sabertooths, one carnotaur, and behind them, just starting to take interest, a pair of tyrannosaurs who I may have run a bit too close to without noticing them.
"THERE IS NO AROUND!"
The nice thing about video-game cliffs is that if they're not sheer, sometimes you can cheat them, running sideways and down, and landing without having broken your bones. I did this, knowing that my pursuit could do the same thing.
I splashed through shallows at the base of the cliffs, and then saw that I was being charged from the front by a velociraptor. It was over.
Then I saw that the velociraptor had a saddle on it, and there was a woman in the saddle.
"I've got you, Dad!"
I missed what happened next, because it happened behind me. I did get game alerts telling me that my tribe's pets were killing things, but they went by too fast for me to count. I saw exactly zero flashing red alerts, which meant that Keliana had killed everything chasing me without taking any casualties.
That's my girl.
The title of this post includes the words "Tree" and "Fort." I'll spare you the extended description of the  tree fort my kids and I built on the edge of the Writhing Swamp, and post a nice screencap instead. 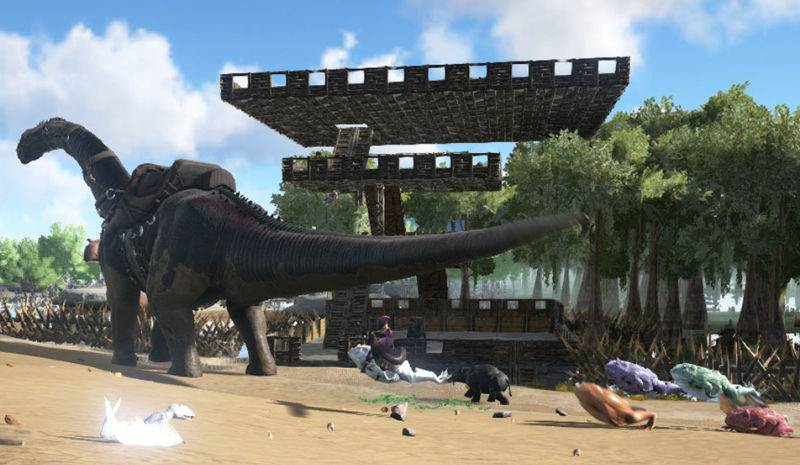 Are we playing this game the way it was meant to be played? If the online PVP tournaments are any indication, we're doing it all wrong.
I base-jumped into a pack of carnivores and got rescued by my daughter, who was riding a velociraptor.
Wrong is fine.
(cross-posted from howardtayler.com)