I've wanted a wide-screen television for quite a while, and this year their prices and our income finally curved into a sort of alignment. Sandra agreed to let me have as much as a thousand dollars to spend. At first she was reluctant, pointing out that the things upon which we spend money say something about our values. I pointed out that we'd spent more on my Warmachine hobby in two years than on television-related things in six. But this isn't a blog post about THAT. This is a blog post about technology. This is Howard Tayler, technologist and futurist, justifying to you his decision to spend $890 on an off-brand Plasma television that will likely be showing phosphor loss within seven years. Non-projection wide-screens come in two flavors: LCD and Plasma. LCD is, in my opinion, the superior technology. It is also pricier. The picture elements are smaller, allowing for crisper images, but they react just a little more slowly to changes, so there is sometimes a "ghosting" problem, especially with some games. I've never seen it myself, though. Plasma has larger, three-part picture elements, so the picture can't be as crisp. Also, the elements themselves heat up, rather than being back-lit like LCD screens, so the set consumes more energy and gives off more heat. The phosphorescing gases (plasma, hence the name) in the picture elements diffuse over time and extended use, so after thousands or tens of thousands of hours of viewing the set will get dimmer. Finally, if you leave the set on a single image for too long (like a DVD menu or video game start screen) you can burn that image into the phosphors -- sometimes permanently. But... plasma is cheaper. Now I've long been an advocate of spending extra money to get the quality I want out of a product. I have leather seats in my beetle because I knew that if I was going to spend $20,000 on a car, dropping an extra $600 to get the part I actually sit in to feel just right was worth it. But in the Plasma vs. LCD decision I took a different approach. With technologies like these the price is always in flux, and there is a general downwards trend. Over the life of whichever set I chose the price would probably come down as much as 75%. I figured that I could either buy a smaller LCD set that I would be unhappy with immediately (too small for the big movies), but that would last nigh on forever, or I could buy a large, bargain-brand Plasma set that I would not be unhappy with until the phosphors start fading in five years. The third alternative? Spend three times as much money (not really an option for the Tayler family) for a giant LCD set that will last forever AND have all the size and clarity we could ever want. Howard Tayler, Futurist... I imagined myself next year, and two years from now in each of these cases. We'll start with alternative #3: I imagined myself screaming in rage as the price for a 50" LCD set dropped below $1500 by Christmas of '09, and wishing I had the OTHER $1500 I'd spent still in my pockets. How about alternative #1: I imagined myself finally getting sick of the small LCD screen (a mere 40"! Unthinkable!) next year and dropping coin on a newer, cheaper, larger LCD set. In both of those scenarios I end up with exactly what I want in a year or two, but I'm out $3,000 when all the money has been spent. But with the bargain Plasma set... it's big enough, it's crisp enough, and it fit in the budget. And in two years I'll still like it. In five or maybe seven years I'll notice that the picture is getting dimmer. (Note: the manufacturer, Vizio, says I'll lose 50% brightness after 60,000 hours of use, or 27 years of 6 hours daily use. I'm betting I complain in seven years, max). But seven years from now I anticipate being able to spend less than $1500 in today's dollars to upgrade the set with something that will keep me happy for the next seven to ten years, or maybe even more. With plasma I forsee being happy with what I've got for less, and for longer, though I will have to spend more money... sometime in mid-December of 2015. 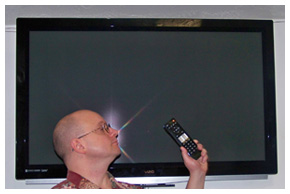 The set I got, a Vizio 50" plasma, set me back $890 + $80 service plan + tax at Sam's Club in Provo, Utah. I wall-mounted it at a slight angle, and for the last two weeks the kids and I have been watching Mythbusters together, and they've been playing games while cooing over the fact that you can actually see which character you are in Smash Brothers Brawl. There have been a couple of minor burn-in episodes already, but it's not permanent, and the kids have been educated. Yes, Christmas came a little early, but this way I get to enjoy my present while I have time to relax, rather than during January. I don't yet have any true high-definition sources feeding into the set, but I have a birthday coming up in February. There is probably a Blu-Ray player in my future. For the last thirty years televisions have been things that we didn't replace very often. My last set, a 27" Toshiba, lasted us for eleven years. The technology is changing very rapidly right now, and the impending digital mandate is forcing upgrades on everybody. For the next decade I expect television sets to be things that some people swap out as often as they get new PCs or video-game consoles -- maybe as often as every two to three years if they're wealthy and unwise. But after that I forsee another entire generation in which that wall-sized screen is only replaced when a child kicks a hoverboard through it, or your teenager tests his new jetPod in the living room.