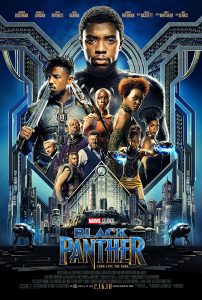 I saw Black Panther on Friday afternoon during its opening weekend, and while I really enjoyed it, I must acknowledge that my experience in the theater was different from the experience of a great many movie goers whose skin color is different from mine.

I identified most with Martin Freeman’s character, and loved the way he responded to being an alien in a world he didn’t know existed. Other viewers will likely identify more closely with Chadwick Boseman’s character, or Lupita Nyong’o’s, or Letitia Wright’s. I loved all the characters, but I don’t see myself in all of them, at least not to the same degree.

This strongly supports my belief that the stories we tell should reflect the diversity of us humans. It matters.

In short, Hero fights Villain who has the same suite of abilities as Hero, but is better equipped to use them.

It’s not a bad formula, but it’s gotten predictable. Fortunately, Black Panther had plenty of non-mirror conflicts going on, and the formulaic one, Black Panther vs Killmonger, served really well as a climactic statement of the movie’s central theme. Of the MCU² films using this device, I think Black Panther gets the most out of it.

Black Panther was great, and I look forward to adding the Blu-Ray to my collection for repeated viewings. It was also the first film I saw this year, so it takes my “most fun I’ve had in the theater this year” slot by default, which is a much lower bar than the film deserves to clear.

¹ Yes, both of them were pretty small, but the yellow one was still bigger. Also, weaponized.
² I’m looking forward to Avengers: Infinity War, but what I really want now is the Shuri/Valkyrie/Gamora team-up.³
³ Directed by Patty Jenkins, obviously.