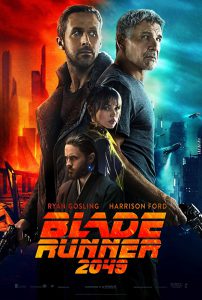 I watched the theatrical version of 1982’s Blade Runner on Friday morning to prep for a 12:30pm showing of Blade Runner 2049. I did this on a whim, but I’m very glad I did, because it made the parallels between the two films stand out, and not in a bad way.

It also meant I spent 5 hours in the Blade Runner universe, and that place weighs pretty heavily on the soul. Even the shiny parts of that future are unsettling, like blood on chrome, and the non-shiny parts are deeply bleak, like broken bones in sand.

But the parallels? Wow. Sure, there were plenty of obvious callbacks, like eyeball imagery, constant rain, and telling the computer to enhance images, but there were also thematic links in the camera angles, color palettes, and the pacing. Even the soundtrack, which was not the work of Vangelis, sounded to me like music which, under decades of environmental pressure, was driven to evolve from Vangelis¹. It’s different, but Vangelis is still there, like mitochondrial DNA.

I was amazed by the film, and I liked it, but Blade Runner 2049 still doesn’t clear my personal Threshold of Awesome. Mostly because I prefer to have a bit more fun at the movies. Setting that aside, however, it is an awesome film².

¹ My library contains several albums of Vangelis music, including at least one version of the original Blade Runner soundtrack. I suspect that Zimmer and Wallfisch spent many hours with a similar library before laying down anything in the studio.
²In the interest of letting moviegoers know what they’re in for: Blade Runner 2049 has more nudity and violence than the original film, and at two hours and 47 minutes it runs kind of long.