I had a blast at Captain America: The Winter Soldier. Both times, even. 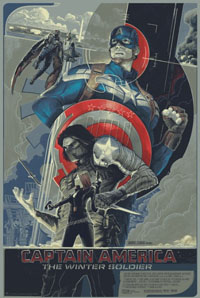 I saw it once in 3D, and once in 2D, and I think I preferred the 3D version for the depth it added to the aerial sequences. At any rate, it was super fun. The action was solid, the pacing was pretty close to perfect, and the dialog was tight without being predictable.

The film was not without problems, however. There was some shaky-cam, for instance. Also the antagonist's plot used a conceit I'm not fond of, and had a hole in it. That hole could have been plugged pretty easily, but I'll hold off on posting spoilers (when I do post them they'll be in "Featured Comments" below.)

The soundtrack was also a bit of disappointment, at least for standalone listening. It supported the film well, but lacked the stirring themes we get from much of the rest of the Marvel franchise. YMMV, there, of course. There are samples you can listen to.

Still, none of this really detracted from my enjoyment of the film while I sat there in the theater. Cap 2 wasn't the perfect superhero movie that I felt The Avengers was, but that's a pretty high bar to clear. It didn't have the emotional power that Act I of Captain America: The First Avenger had, but that film was weighed down by its second and third acts, while this one shone all the way to the end. Captain America: The Winter Soldier clears my Threshold of Awesome and takes the #1 spot for the year.

I hope it loses the spot, not because I want Cap to end up lower on the list, but because it's only April. I want to have at least this much fun at the movies several more times this year. We'll see if that's what happens.