Cutting straight to the chase here, I love this movie. 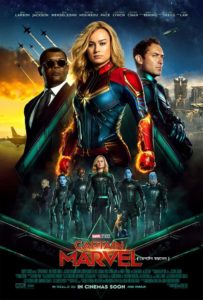 Captain Marvel clears my Threshold of Awesome with room to spare. I’ve wanted more genre-movie Brie Larsen since seeing her in Kong: Skull Island, and Captain Marvel is better than any such thing I could have imagined. She was perfect as Carol Danvers, and the story is exactly what we needed as an introduction to her—with the added bonus of origin stories for Coulson and Fury.

In my review of Doctor Strange I expressed how happy I was that the Marvel Cinematic Universe finally had a proper grown-up on stage. I’m excited to see how Carol Danvers interacts with the rest of the heroes in Avengers: Endgame this spring, because Captain Marvel gives us another proper grown-up, and this one didn’t start out as a self centered man-child.