InConJunction XXVIII began early for me: I had to catch a 6:00am flight out of Salt Lake International, which meant leaving the house at 4:00am, which meant getting out of bed by 3:30am, a full five hours before I usually do.

Hey, now. Sleeping in is one of the rare luxuries I afford myself these days, and I cherish it.

The highlight of Thursday was probably the meet-and-greet at the hotel, where John Scalzi and I sat and talked for an hour or so. If we amused those who listened in, it was no mere accident -- I think we were both practicing for amusing people during the rest of the weekend. 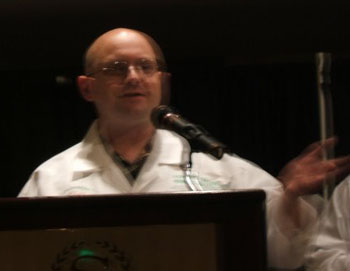 The rest of the weekend was a bit of a blur. No really -- look at me over there on the right, moving too fast for the photographer to keep up. I had four panels plus the Opening Ceremonies on Friday, and another four events to attend on Saturday (a breakfast, two panels, and a dinner -- it's a tough life.) Between sessions I manned my table, drew a few pictures, and committed various flavors of commerce, including the magnetic kind.

(I should point out that the first batch of magnets arrived on my doorstep at 10:30 pm the night before I departed for Indianapolis, and packing them for the trip meant that I only got three hours of sleep.)

Both of my panels with John Scalzi were fun. During the "Building an Audience Online" panel I felt kind of like a neophyte. John has been blogging since back before it was called blogging. Our other panel was on "Reliance on Science," and most of what I remember was the doom-and-gloom predictions of Joe Greene, the third guy with us. Me, I've got a little bit more faith in my fellow human beings. When the apocalypse comes I believe most of us will be sticking together rather than impaling each other with spears.

I sold almost everything I brought with me, which sounds impressive until you realize that with the new airline limitations on baggage, I didn't really bring that much. Still, it's nice to not bring it home, and to have a fat wad of cash to hand to Sandra when pushing through the door. "Bacon, honey. Go ahead and fry it up in the pan."

And now, a convention critique: InConJunction is pretty close to perfect. The people are fun. The programming is solid. The venue is ideal. The dealers' room is full of cool stuff. I had a great time, and I strongly recommend this event to anybody in the neighborhood. And to my fellow professionals? If they invite you, be sure to go.

The Sheraton hotel is great (though the hot-tub was out of commission that week) and is attached to a shopping mall with a food court. That means attendees are not locked in to hotel food or con-suite pickings. The gaming track was a little on the light side, but that's okay. InConJunction focuses on science fiction and fantasy, and has a very strong science -- REAL science -- track. The event is run by a non-profit organization made up of hard-core SF&F fans, and they have been doing this for decades now. This event exudes a measure of professionalism that I believe raises the bar for fan conventions. Oh, and this year they had lab coats -- too cool for words, those were.

I'm not going to be there next year (convention sabbatical for Howard during 2009) but I'll go back in 2010 (or '11, or 12...) if they'll invite me. If you're looking for a geek crowd to hang with, and you live in the greater Indianapolis metropolitan area, check out the Circle of Janus (the folks who put on InConJunction.) They're fun, they're smart, and you won't have to wait until next year's convention to join in the festivities.