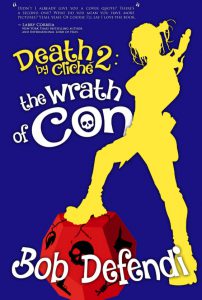 My writing group has been critiquing, and to some degree workshopping, the Death by Cliché series with their author, Bob Defendi. I’ve enjoyed the process immensely, even just reading the first full drafts.

The central premise of the series is that our protagonist, a game designer named Damico, is trapped inside a pencil-and-paper RPG. The game is being run by a not-very-good GM named Carl who leans heavily on the tropes and clichés of western fantasy, which is inherently problematic since the world created by Carl and his players is now becoming populated by thinking, feeling people who have strong opinions about things like the proximity of their  village to the dungeon full of monsters up in the hills.

In Death by Cliché 2: The Wrath of Con, Damico learns that the RPG sessions in the real world have started up again, this time at a convention, and Carl’s plans for this adventure involve pitting the player characters against a foe who can control the weather.

If you’ve spent much time playing tabletop RPGs you may recognize yourself, or your GM, or your fellow players in this story. Bob assures me that this is the purest of coincidence.