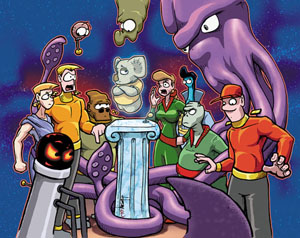 You probably already know the drill, but just in case: "Numbered Customer Choice Sketch Editions" are limited, and are, as the name suggests, numbered. Each one is unique, because I draw a picture in the back. The customer (that's you in this case) gets to select the sketch from a menu in the store. If you select "Artist's Choice" you might get something weird. In the last book I decided to fill a bunch of the "Artist's Choice" orders with garden ninjas from the bonus story. This time around you might end up with the Shardpope. I just don't know.

All books you order during the pre-order period (including other titles, bundles, whatever) will be signed on the cover. All copies of Emperor Pius Dei will be accompanied by an 8"x10" print of the full cover art (shown to the right.)

Here are some relevant links:

The store also has magnet sets and vinyl stickers, including several you've seen before, plus the brand new Steampunk Cthulu sticker.

Many of you have asked for t-shirts. We're currently between vendors on t-shirts. We hope to get those back in the store, along with new designs, and completely new merchandise later this summer and into the fall. Watch this space for news along those lines.