I'm afraid I don't have anything nice to say.

FANTASTIC FOUR: I haven't had to work this hard to not fall asleep since Transformers 2. 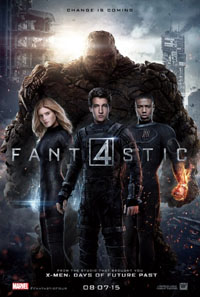 For the record, I have zero problems with a black Johnny Storm. The actor did a great job with what he was given, and nothing felt forced. So let's get that out of the way. I also don't have problems with the many violations of Marvel canon. A movie should be allowed to be its own thing, working freely within the space it stakes out, whether it's being adapted from a best-selling novel, a beloved short story, or a comic book.

No, my problem with this movie is that I was bored. A lot. I nearly fell asleep at the 75 minute mark. I actually regretted the decision to see it, with real regret for the lost time AND the fact that I was going to have to think about this movie AGAIN in order to write the review.

The best metaphor I can think of for this movie is that it is akin to the output of a cargo cult. The film makers have all these artifacts of the great comic book adaptations that have visited their island in the past, they have collected the flotsam that has washed up on their shores, and now they have built something that they think looks like a movie in the hopes that they can summon a magic that they do not understand.

Many of the right pieces are in this movie. They are not connected correctly, and some key pieces are missing, so the result feels counterfeit, and kind of insulting. The film adaptations of The Fantastic Four that we got from this same studio in 2005 and 2007 were much better, and they were not very good to start with. It's remotely possible that this film will be enjoyable in a throw-popcorn-at-your-TV kind of way in a few months, but please don't invite me to your house for that party. I cannot sit through it again.

Fantastic Four enters my list below the Threshold of Disappointment, sitting pretty at #20. The only reason it isn't all the way at the bottom is that I expected it to be kind of bad, while I had high hopes for Furious 7. So yeah, it's my fault I didn't enjoy it.

Fantastic Four was bad because my low expectations were not low enough.