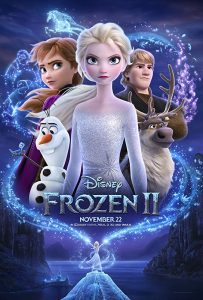 I don’t think Frozen II is going to get sing-along screenings, but I’m okay with that. To my mind, if there’s a weakness¹ with Frozen, it’s that one of the songs was so iconic, so memorable, and so infectious it unfairly raised the bar on the rest of the franchise.

Reset that bar, and Frozen II stands up just fine. The music perfectly suits the story, and the story is complex enough to give people (including parents and their children) interesting and important things to talk about after the show is over. Oh, and Olaf’s recap of the first film calls to mind Michael Peña’s recaps in Ant Man, demonstrating that there’s more than one way to entertainingly and unreliably re-narrate.

Taken together, I think the Frozen films suffer from a worldbuilding problem: specifically, the first film was written without the sequel in mind, and the worldbuilding that made the second film so very interesting raises the “wouldn’t someone have mentioned that?” question with regard to the first film.

Put another way, they created a fascinating setting, and it’s so immersive I want it to hold up like a proper epic fantasy rather than than a couple of animated musicals.

Worldbuilding notwithstanding, Frozen II clears my Threshold of Awesome. I’m “I remember every Peter Cetera² music video” years old, and Kristoff’s musical number alone was enough to lift the film over the bar for me.

¹ There’s more than one weakness, but this review isn’t about the first film.
² Cetera was the bassist and lead singer for Chicago in the 80’s, and did well as a solo act. Kristoff’s number sounded like a callback to Cetera’s entire catalog of ballads, and I loved it.