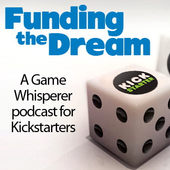 As most of you are aware, last month the Schlock Mercenary board game Kickstarter project funded, and was the #2 all-time highest funded board game project on Kickstarter

My friend Richard Bliss, The Game Whisperer, interviewed me at the outset of the project, and he interviewed me again yesterday to follow up. If you've ever wanted to hear me admit to being wrong, go listen to Funding The Dream, Episode 22. It's only 20 minutes long. Richard and I talk about the lessons we've learned, and the lessons that the board game industry, and perhaps a bunch of other industries need to learn.

Also, if you've ever considered going hat-in-hand asking for money to run a project, you should be listening to "Funding The Dream." I cannot stress this strongly enough. Richard's focus has been board games, but the principles he shares have wide application, and I credit his counsel with a large measure of the success that our project enjoyed.

As an added treat, I dropped the official name of the Schlock Mercenary board game during that podcast. Expect an official announcement though the appropriate channels soon...