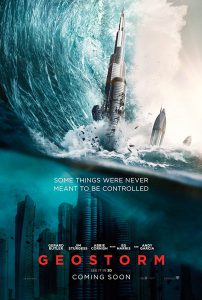 The message of the film, “let’s take care of our planet responsibly,” is delivered a little heavy-handedly, and since the audience for the film is the crowd who’s just there for the popcorn, I’m not sure it’ll be received as intended. Still, it’s nice of the filmmakers to give it a shot.

Geostorm arrives on my list at the lower middle of the “not awesome, not disappointing” pack.