This weekend I discovered Granite Flats. Or rather, it discovered me.

The program is produced by BYU-TV, a local studio that has up until now been best-known for their Studio C sketch comedy series. Somebody on their marketing team got the impression that I'm "press" because I go to the movies a lot and blog about them, so they invited me and a plus-one (read: Sandra [also, read Sandra!]) to the Granite Flats Season 2 screening. 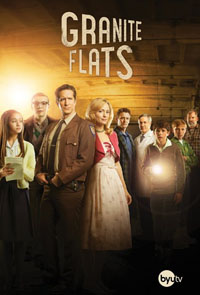 Here's my counsel to you: watch the pilot for free at BYU-TV's website, and then plow through the remaining eight episodes. Do this before April 6th, in time for the premiere of Season 2.

I'd never seen an episode of the show before Saturday's screening. It began with a 2-minute recap of Season 1, then some sneak-peeks, and then the first episode of Season 2, and while I could tell I was stepping into the middle of a story, I didn't mind at all, because it was wonderful.

Granite Flats is a suspenseful drama, set in Colorado in 1963. It's inspired by actual Cold War events surrounding the CIA program "MK Ultra," and it follows an ensemble cast of soldiers, doctors, nurses, FBI agents, CIA agents, spies, and very clever children. The child actors were outstanding. Their scenes were some of my favorite parts of the program, and not because they were clearing a low bar: the whole cast was convincing, and I have to confess that I was stunned that this level of production was coming out of a studio here in Utah.

It's not that good programs can't be filmed here. Hollywood shoots in Utah all the time. But Granite Flats didn't just scoot up I-15 for the red rocks or the salt flats. They started here, shot the whole thing on location here, and created something outstanding.

I believe that the key reason this program is so good is that the writer and the director are not being second-guessed by a suit somewhere. They're following their vision, and the folks holding the purse-strings are trusting them to get it done right. I had the opportunity to meet with both men, John Plummer and Scott Swofford, after the screening, and I found their passion for this project downright infectious. They love what they're making, and that comes through on the screen. I got to meet a number of the actors as well, and they were equally enthusiastic.

And that's a thing I like to support, because I know what it feels like to be in love with a project.

I mentioned sneak-peeks earlier. Oh my! We got to see several minutes of footage from the middle of Season 2 featuring Christopher Lloyd as a junior-high English teacher, and Cary Elwes as a just-moved-in-next-door-can-I-borrow-some-sugar CIA agent. Both performances were among the best I've seen from these two. Idon't think I've ever been as creeped-out by Cary Elwes as I was during his neighborly invasion of the mad scientist's kitchen, and Christopher Lloyd's scene... take the unhinged energy of Doc Brown, season it with 30 years of experience, and now turn it loose on Shakespeare.

As an aside, the screening was a little weird for me. I'm accustomed to introducing myself in professional settings with "I'm Howard Tayler. I'm a writer and an illustrator," or perhaps "I make comics." Here though I'd try to get away with  "I'm press!" and then folks would ask "oh, who do you write for?"

Umm, good question. I failed to come up with a glib answer. A few times I tried to explain it. "I make a comic, and I see a lot of movies, and I write about them in my blog under the comic, and because my readers are a self-selecting group who enjoy what I make, I've found that their tastes often align with hey why did your eyes just glaze over oh crap I've done it again."

Worse still, while "Schlock Mercenary" is a memorable name, in the TV industry those two words have actually been used as an actual insult. So, there's that.

Fortunately, I don't need to make a living as a film and television critic, because I get to be a cartoonist. But I'm happy to keep telling you folks about things I like, even if my URL does make entertainment types a little nervous.