I like superhero origin stories. Done correctly they tell us how to be better people while at the same time granting our desires for escapism. They let us explore some of the very best "what-if" scenarios popular in most genre fiction, not to mention more than a little bit of wish-fulfillment, and they take us across the threshold and clear around the horn of the whole heroic monomyth. 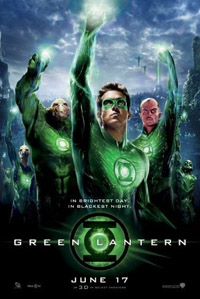 All of those pieces were present in Green Lantern. The sum, however, failed to exceed the mass of the existing parts.

Don't get me wrong, I had fun in the theater. The story moved along at a decent clip, the acting was just fine, and Peter Sarsgaard was wonderful as Hector Hammond. The special effects were fine, and the 3D (as seen from the middle of the theater) was seamless -- no headaches, no incomprehensibility, no problem.

But as I walked out of the theater I had questions. First among them, why didn't they imagine more? The ring (small spoiler alert) makes real anything the wearer can imagine. Sadly, almost nothing any of the ring-bearing characters imagined surprised me. I'm not patting myself on the back here and suggesting that I'm somehow so creative that I could second-guess a creative team who had months to prepare for my 105-minute stint in the theater. I'm suggesting that the creative team phoned that crap in.

It's okay for Hal Jordan, who is brand-new to the ring, to imagine things we all would -- sword, machine gun, artillery piece -- we're told that his imagination is inadequate, and those inadequacies play out well. But the rest of the corps? They need to be doing some SERIOUSLY COOL STUFF, and it only happens a couple of times, and then only in training.

But the big disappointment lay in the fact that with thousands of Green Lantern Corps members there seemed to be no effort made to network ring powers, to jointly imagine things far beyond the capabilities of one person, even if that person is really clever.

Why did this disappoint? Because I've seen how the real world works. We all have. All the great technological advances you see around you are the work of shared imagination, joint effort, and teamwork. Great literature gets better when an author teams up with some research help and a good editor. I'm not discounting individual inspiration, nor the power of the new idea in the hands of a lone idealist, but the real power lies in the sharing of that idea with people who will develop it, refine it, and fuel it with their own portions of brilliance.

The lesson of this film, however, seemed to be "we need lots of you lantern people because it'll look good in the pull-back shots."

Is my complaint a fault of the film, or the source material? Does it matter? I guess the hard-core "Green Lantern" fans need to weigh in on the film, and let us know whether or not my whining has any weight when compared to the comics.

Green Lantern is my new #10 for the year. Yes, that puts it just below Thor, whose IMAX 3D origin story left me nursing a headache after the show.