I, Frankenstein was very pretty, and featured some great acting talent. To say, however, that it "had some problems" would be to risk understating the matter a bit. 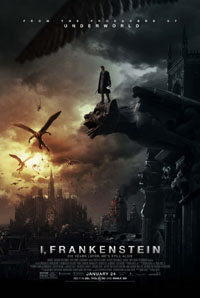 Hey, I had fun, but the movie knocked me right out of the story over and over by doing ridiculously dumb things. Usually the dumb things had to do with character motivations, but the mythos called attention to itself in bad ways, and the "science" failed to clear the already-low bar that Hollywood sets for genre fiction.

About halfway through the first big battle scene I found myself with action movie fatigue, characterized by the realization that I don't really care much who wins this fight. Better movies solve this problem by making sure I care (Pacific Rim did this well in spite of its handicaps) and by breaking up the action with something else that is satisfying (HULK SIDEPUNCH THOR from The Avengers is one of the best examples of this I can think of.)

I, Frankenstein is from the folks who brought us Underworld, and it does not live up to that promise, the awesome Bill Nighy notwithstanding. It's the first film I've seen in theaters this year, so it comes in at #1 as of this writing, but by the end of the year it will be pretty far down the list, just above the Threshold of Disappointment. My stake, it is in the ground.

EDIT: Actually, no.This is the second film I've seen this year. Apparently when I wrote this review I was very effectively repressing my Legend of Hercules experience. Wow.