I want to discuss "infowar," which is what is going on right now around Wikileaks. It's fascinating, and the scope of this particular conflict grants it the potential to be the defining event of the information age.

I want to announce new merchandise, because that's how I make money.

So... I'll lead with the money-maker, and then we can have a nice, civil, non-DDOS'd discussion about infowar.

We just got a new shipment of magnets, and with the exception of the (very) familiar images on the front, they are completely different. The old magnets were laser-cut acrylic, small-ish, and very expensive. The new magnets are larger, vinyl, and less expensive. They're $1.00 each, but a full set of all eight will only set you back $5.00 (+s&h), and they're a perfect stocking-stuffer for that Schlocker in your life. Or, you know, for you. 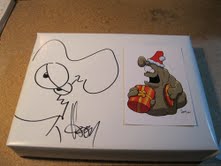 And speaking of stocking-stuffers, we're now able to offer gift wrap as an option. The wrap includes a Christmas-themed Schlock card, and the paper is a plain, smooth, white; the perfect surface for me to deface. Yes, I shall be defacing every gift-wrapped package.

On to the infowar!

Somebody (I forget who) tweeted that the Wikileaks fight right now is the first infowar in history. I disagree. I think we've fought numerous infowars in the last fifteen years. And that's really what I want to see discussed in the comments. We can argue right and wrong until the eCows come 127.0.0.1 but nobody is going to walk away convinced. I want to see a list of information-age conflicts that you feel qualify as "infowar." Me, I think the RIAA vs file-sharing qualifies. My buddy Rodney suggested RBLs vs Spammers (the spammers won that one.) Somebody pointed out that the Secret Service raid on Steve Jackson Games back in the 80's might qualify.