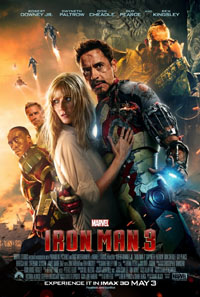 Iron Man 3 is my new favorite movie of the year. I had a blast at the 9pm show last night, and I'm seeing the film again tonight with my friend Alan (who has ALSO seen the film already.) Iron Man 3 is now my favorite of the Iron Man franchise (excluding The Avengers, which I probably shouldn't since a solid "Hollywood Formula" analysis shows that Tony Stark was the protagonist in that film.)

Had I more than 140 characters to work with I could have said more about what made Iron Man 3 so much fun, but I don't want to spoil it for anybody. Going in I was concerned that the trailers might have spoiled the film for me, but my fears proved groundless. Their trailer-fu was good -- they got me into the seat, but they didn't telegraph the good stuff. Of course, if you haven't seen any trailers the film could be extra-awesome for you. Just go plant your backside in a seat and enjoy the ride.