At this point in the year I hold out little hope of anything outshining How to Train Your Dragon for me. I had great fun at Iron Man 2, but it was a "2" movie with not enough surprises to really shine. Still, it edged ahead of most of the pack, and it's a big pack. Here's my updated list for 2010: 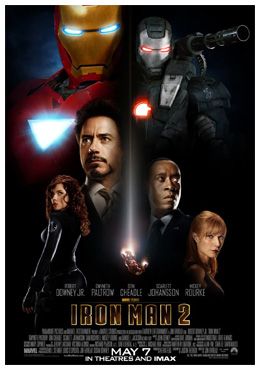 1) How to Train Your Dragon

6) Clash of the Titans

This is the last time this year that I'm going to put this full list on the same page as the review post. It's getting unwieldy, so I'm giving it a page of its very own.

Now, on to Iron Man 2. This movie was very faithful to the Iron Man franchise, and everybody involved turned in fine performances, including the special effects teams whose work is what most of us were turning out to see. I had a great time, and I think it's safe to say that if you like comic books and and comic book movies, you'll have a great time too. Stick around through the end of the credits for some teasing about upcoming Marvel films.

Travis Walton, who colors Schlock Mercenary, was engaged by Marvel to do a set of collectible sketch cards for the film. He has also done a print which you can order directly from him. He can even hand-color it. Travis is so much more than just a Schlock colorist, folks. You need to be checking his stuff out and marveling (pardon the pun) at how incredibly fortunate we all are to have his work making my work look presentable. And if you're an Iron Man fan, and want a hand-colored print of the picture to the left, email Travis and he'll hook you up.

Back to the film... I have just one complaint, but it is a complaint with the whole Iron Man franchise. There is a subtext with which I take issue: the belief, completely supported within the film, that high-energy technology can only ever be entrusted to a few people. I can understand this (I grew up during the Cold War, after all) but in the Iron Man stories those people continually betray that trust by using the high-energy Iron Man power plants to maintain the status quo.

Tony Stark should not be building defense platforms. He should be building a lunar colony. He should be terraforming Mars. The energy yields depicted in these fictions are humanity's ticket off-world, but since that's not the story Marvel wants to tell, we never go there. I sympathize with Marvel's desire to keep Iron Man grounded in the "real" world, but this makes the subtext of the stories more than a little bit insidious. For all the heroism and technophilia supposedly depicted, Iron Man exudes technological pessimism very quietly, like the silent-but-deadly fart that everyone in the room can smell but nobody heard coming.

There. I said it. Iron Man is a fart. Wow, this review went to a weird place.