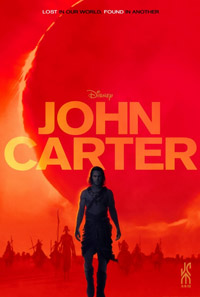 No, the bar was not high (it's only March, after all), but I suspect this movie will remain in my top five no matter how many more films I see this year.

Now that we've got that out of the way, what are you waiting for? Go! Enjoy John Carter! I saw it in 3D, and it was a lot of fun that way. Your mileage (and/or migraines) may vary. If 3D gives you fits, see it in 35mm.

Were there problems? Yes. Is it science fiction? Not by my current standards, no, but that could prove to be a very long and involved discussion. Did any of the problems ruin the film for me? Not in the least. I plan to go back.

Now, some caveats: just because Disney has their name on this film, don't go thinking it's a great show for your kids. It's violent, even if a lot of the spilled blood is blue. They've managed to tone down the raw, naked sexiness of the source material pretty significantly, so you don't need to worry about averting young eyes on that count, but if you have objections to violence, a film about a Confederate Civil War hero who becomes a war hero on a planet we've named after the god of war is probably not a great choice.

It didn't bug me, but you've probably already twigged to my tastes in these things.

Why is it not science fiction (for me?) Short version: Because none of the science I'm personally familiar with will allow the level of jumping our hero does, nor will it support the technology the Martians have. None of the key plot points were driven by real science.

The film does provide an internally consistent magic system that nods in the general direction of science. So maybe we can say it's more like an epic fantasy masquerading as science fiction under the guise of "any sufficiently advanced technology." Frankly, the classification isn't that important. It was definitely science-fiction in Burroughs' day, so I shan't complain at whatever label you choose to apply.