I saw Man of Steel with Brandon Sanderson on Monday as the two of us recovered from the Out of Excuses retreat. We were both roundly disappointed. 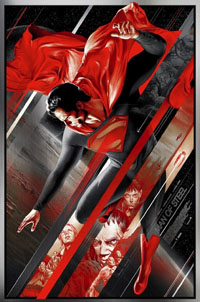 We both agreed that a space opera in the style of the opening scenes would have been excellent. That was not the movie we sat through, however. By the end of Man of Steel both of us were bored and suffering from action movie fatigue. On my "how much fun did I have" scale, Man of Steel comes in at #11 for the year. Behind Burt Wonderstone, if you're keeping score.

On Twitter I said the following: "Man of Steel is grimdark Superman done badly."

There were lots of things I had issues with, and if the conversations I've overheard are any indication, some of these things are pretty polarizing. Pa Kent's characterization felt wrong, Jor-el's hologram undermined the sense of peril while over-expositing, and much of the dialog was predictable, trite, or just silly. Horrific destruction was wrought upon mortal combatants and civilians alike, but nobody (not even Supes himself) expressed sorrow over the damage done. I loved the Krypton prologue and the scenes that flashed back to Clark as a youth in Kansas (in spite of the wrongness of Pa Kent,) but they certainly weren't enough to carry the film.

My final complaint, and it really should be the first one: shaky cam. Stop that, Hollywood! Don't you know we hate shaky cam? Aren't you listening? It's not artsy, it's not edgy, and it's not entertaining. It's overdone, it looks like a cover for sloppy choreography, and it fails to advance the story because we can't see the finer points of what's happening. Why do you even do this?

[UPDATE] I hadn't added an image for this post by the time it went live, so I headed out to IMDB to grab the movie poster. I found this unofficial image in grey and red by Martin Ansin. It really captures the spirit of the film -- grim and bloody. I can see why Martin did the poster this way, and I can also see why the studio would choose never to use such a thing. It tells the truth about the film.