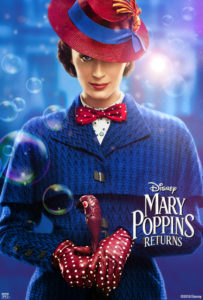 As a kid I watched the original Mary Poppins a great many times. The film is indelibly etched in my brain. Did adult me have doubts that Mary Poppins Returns could be worth my time? Of course. But Sandra and I both plunked down our ticket moneys and saw the movie on Wednesday.

SANDRA¹: “That’s… a lot of CGI remakes.”
ME: “Guys guys guyyys I found a room full of people paying to see a Mary Poppins sequel.”

The Mary Poppins sequel was, well, practically perfect in every way. I didn’t think anyone could hold a candle to Julie Andrews performance, but Emily Blunt has a much more robust skill set than I gave her credit for. Specifically, wow, the woman can sing.

On the other side of that coin, there was no way anyone could step into the amazing dancing shoes of Dick Van Dyke, and as it happens, Lin-Manuel Miranda is very wise. He danced well enough, but he sold us with his singing, which (no surprise) he does an outstanding job with.

Blunt and Miranda had a very high bar to clear, they cleared it.

Everyone else did a fine job

, too. I recall a couple of moments in the original Mary Poppins when the child actors didn’t quite come up to the level of the other performers, places where I imagine the director saying (quietly, and to no-one in particular) “It’ll do. It’s probably the best take we’re going to get.” There were no such moments in Mary Poppins Returns. The kids sold it brilliantly.

¹ We’re not the sorts of people who talk during movies, but we’ll whisper and giggle quite a bit during previews.