No, Michael Bay Has Not Destroyed Your Childhood
Tuesday May 13, 2014 • Howard Tayler

With the release of trailers for the new Teenage Mutant Ninja Turtles film, and the latest Transformers 4 trailer that reveals Optimus Prime riding the T-Rex dinobot "Grimlock," I'm hearing anew the wailing of folks who feel like Michael Bay has destroyed their childhoods. 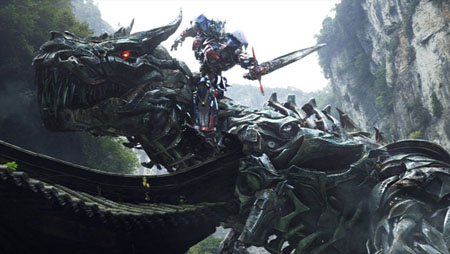 Well, no. He hasn't. Your childhood and mine are just as intact as they were before these movies came out.

What Bay and numerous others have done during the last sesquidecade of reboots, re-makes, and small-to-large-screen adaptations is capitalize on the nostalgia we feel for certain properties. From The Dukes of Hazzard and Starsky and Hutch to the Transformers franchise, from Peter Jackson's Lord of the Rings and Hobbit trilogies to the Star Wars prequels and the Star Trek Retcon Reboot, we're seeing production companies lower the risk of their investments by putting money into properties that have a built-in fanbase of folks who still hold some nostalgia for the original.

What they're doing is strip-mining our nostalgia, and then not replanting when they're done.

With rare exception, I'm not going to feel any nostalgia for these newer properties in coming years. I won't fondly remember Transformers 2, or Attack of the Clones, and it's not because I'm not the child I was when I saw the Transformers cartoons or The Empire Strikes Back. It's because these latest installments didn't really have anything new to offer.

I admit that I do actually feel some nostalgia for Jackson's Lord of the Rings trilogy. I loved it more back in 2003 than I do now, and I kind of long for the ability to stand in line again for those movies. I think that's what nostalgia is, right? Time passes, and we sort of wish we could go back and experience those things again? And that's exactly why the strip-mining works. The filmmakers tell us that we CAN go experience those things again.

But is that what we really want? When I was interviewed back in 2009 for The People vs George Lucas, I said that what I really wanted Lucas to do was take all that money and social capital and infrastructure and build a new universe with new characters and tell us a new story. Not because I'm sure it would be awesome, but because I want something new.

That said, yes, I'm going to see Godzilla this week, and I'll see Transformers 4, and the new TMNT, and a bunch of other strip-mining operations because unlike REAL strip-mining, this nostalgia isn't home to a bunch of spotted owls and rare conifers. It's just a place in my brain, and now that I know how to word what's being done to that place, I'm actually a little more comfortable with it.

These films may try to say "Ha! You actually CANNOT go back and re-experience Transformers or TMNT or Godzilla for the first time!" but since I already know that I'm less likely to be disappointed. These may still prove to be joyless time-sinks, but with time-travel off the table I stand a better chance of getting my money's worth.