I'll be up front with you: I wanted to not give this film my #1 slot for the year, because I didn't want to get branded a big softy.

Hey, guess what? I'm a big softy, and this film played straight to me, through me, and around me. Number one. 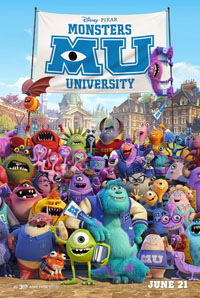 Deconstructed, it's a by-the-numbers sports movie set on a college campus. The central conceit, the "hook" is that all the students are monsters, and the competition is "scaring," which practice adheres to the mythos established in the Monsters, Inc movie: don't touch anything, don't get caught, doors are portals, etc.

We've seen this movie (sans monstrous hook) done well, done badly, and done hundreds of times. After watching the trailers you might be expecting anything from "Revenge of the Nerds" to "Bring it On." And regarding the formula, at a high level, you would not be wrong.

But it works. See, I know the formula. I expected the training montage, the cliques, the clash of personalities, the pep talk, the big game. I saw all of those coming. A few of them arrived with twists, all of them were presented with "monstrous" flair, but they all played to formula. And still it worked perfectly.

Why? Well, I guess I'll need to see it again to further deconstruct it. But I'm looking forward to that. I had a blast laughing out loud and cheering secretly while sitting with my friends Alan, Gus, and Brandy. I'm sure I'll have fun when I see it with different, younger friends: ones for whom my own applications of the film's themes can be seen in how Sandra and I have raised them.