Since I suspected I wouldn't be able to fall asleep Thursday night, I went ahead and caught a 10pm showing of Oblivion, a near(ish) future sci-fi film. 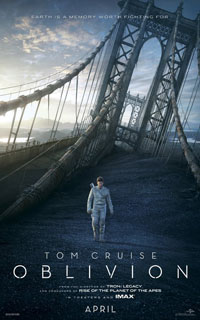 If you've seen the trailers, you already know that this is a mystery story with a healthy dash of action and suspense, and if you've mused upon enough of the trailers, you may think you've already figured out the mystery. Truth be told, there are enough of you out there watching trailers and speculating that I'm sure somebody got it right.

I got parts of it right straight from the beginning.

So... if you haven't seen any trailers yet, don't bother with them. The film is interesting, and pretty, and I'll let it slide under the wire on the science problems. I had a good time, but not a fantastic time. Still, the movie didn't disappoint -- probably because after seeing the trailers I figured I knew exactly what I was in for, and that happened to be exactly what I was in the mood for.

(Okay, by that standard maybe you should see the trailers.)

At any rate there's not much more I can say about the film without spoiling things. Oh, I can complain about the physical impossibility of a cataclysm that buries New York City in rock and sand to a depth of 300 meters while leaving the tallest skyscrapers still standing, but if I whine about too many of the technological, motivational, or strategic gaffes I'll give away the central conceit, and that wouldn't be fair to you.

I'll probably do that in the comments.