Two announcements. TWO! (Then you get a movie review.)

First, if the LFG video game Kickstarter funds, Sergeant Schlock will be an available NPC! It's late in the cycle on this, and funding is by no means a sure thing, but please have a look at least. There's a backer level specifically for getting Schlock as your NPC.

Second, oh, hey! Pre-orders are open! As of this writing just under 400 customer choice sketch editions remain. They'll last through the weekend, I'm sure, but if you have to have one, don't wait too long.

On to Pacific Rim... 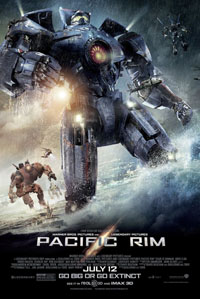 Let me get this bit over with: to my mind, every technological advance necessary to create a walking mech will be obviated by better uses of that advance. As my friend Dave put it so brilliantly several years ago, (and I paraphrase) "If your tech is so superior that you can get away with giant killer robots, the only reason to use them is for sheer intimidation. This means that what you should be building is giant killer robot clowns."

The point is, when I see giant robots I write them off as "magic" and then watch them fight. It looks cool when they do that. In that frame of mind, and attending a late show with my 18-year-old daughter and 15-year-old son, the film was awesome. I had a blast.

I can imagine a frame of mind in which I'd enjoy the film much less.

Look, if you don't love kaiju (the giant monster genre), this just isn't going to be your movie. If you do love kaiju, nothing I say will keep you out of the theater. Am I right? Of course I'm right. Why are you still here? Go buy tickets already.

The story? VERY PREDICTABLE, especially if you're familiar with the genre. Lots of the kaiju tropes were there, and that's fine. It's familiar. There were some "why don't they just lead with THAT next time" moments, and that's its own trope. Many of you would be disappointed if it were absent.

The visuals? Beautiful. We saw the film in 3D and that added a lot. If you can stomach 3D, this is a good film to spend the extra money on.

Pacific Rim comes in at #5 for me this year. Respectable! It cleared the Threshold of Awesome!