The last fifteen years have spoiled us. Back in MY day when we heard that a movie had a sequel we were mildly enthusiastic because we knew it wouldn’t be as good as the first one. Smokey and the Bandit II, and Sister Act: Back in the Habit present themselves as typical examples. 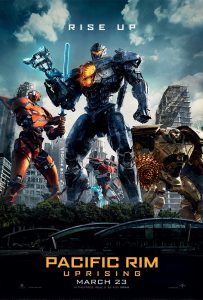 Pacific Rim: Uprising takes me back to those days by being a “2” movie. It positioned itself for further serialization, but I don’t think they’re doing a very good job of serializing it. They simply sequeled it.

Granted, they made a fine sequel. By my “back in the day” standards we’d have been floored by how good this particular sequel was… for a sequel, of course. The movie does a number of things right, starting with fine performances by John Boyega and Cailee Spaeny. There there were several action sequences that were simply delightful, and it even had surprising-yet-inevitabe plot twist. It didn’t clear my Threshold of Awesome, but it certainly didn’t disappoint me.