I believe that the very best convention reports are not blow-by-blow travelogues, but are instead the ones that provide amusing anecdotes. In that spirit, I will write one page instead of thirty, and from this you will be able to extrapolate just how much fun Penguicon was. Patrick Rothfuss, Sandra Tayler, and I all performed a land grab in the lobby. Once we had couches in our preferred configuration, we invited friends over, including Jim Hines and Tobias Buckell. We all kicked back and talked about stuff. Silly stuff, deep stuff, and just a bit of vulgar stuff. Like drum circles. Eeeew. There were fans there as well. Erin and Amanda are aspiring writers, and we spent some time offering them advice. And that right there was where I managed to put my foot so far in my mouth it came back out my butt and hey, look! I can still walk! You see, an interloping nay-sayer also offered advice, and once she left we sought to correct her egregiously mark-missing misinformation. Sure, sure, only one out of thousands of aspiring writers ever amounts to anything, but let's look at improving the odds. "How many of them actually finish a first novel?" I asked. "Once they do, their odds go way up, even if that isn't the novel that puts them on the map. Now, how many of them go on to finish a SECOND novel?" I actually pounded on the arm of Pat Rothfuss' chair for emphasis. Did you know that the very first novel Pat Rothfuss ever wrote, The Name of the Wind, not only got published, but became wildly popular and won a Quill award? And that  Publisher's Weekly named it one of the "Best Novels of the Year?" I knew this. Did you know that his second book isn't out yet, and that lots of people complained at him for taking too long to write it? I knew this, too. I also knew Pat was sitting right next to me, but in that moment, somehow, I forgot all of these things, and managed to turn otherwise contextually appropriate advice into an insult from which better men would forge blood feuds. If I recall the following moments correctly, Tobias Buckell shrieked with laughter, Sandra gasped, Jim Hines went slack-jawed, and Patrick Rothfuss, who sells more books than I deliver page-views, dropped the f-bomb right on my head. Me, I stammered, and then blushed. I should point out that on me a blush runs from my cheeks clear up to the dome, and my ears go bright red. I can tell it's happening because my head feels like it's on fire. Perhaps Patrick's f-bomb was incendiary? At breakfast the next day I attempted to apologize (again) and Patrick graciously told me that my remark was obviously guileless and innocent, and besides, that was the very best moment of the convention for him. 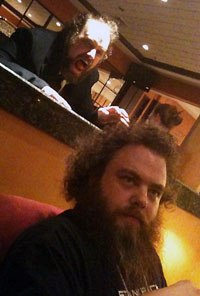 Patrick, thank you for being so understanding. As a token of my appreciation, here is a photo of Randy Milholland coming up behind you to kill you. I hope you receive this in time to do something about it.