Last weekend I saw Priest. This morning I saw Pirates of the Carribean: On Stranger Tides. So... here we go! 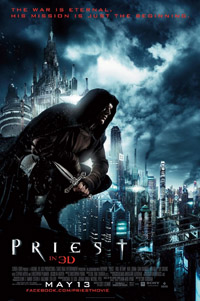 Priest. Neat imagery, cool combat stuff, but mostly a waste of potential. For example: there was this one moment about halfway through where Paul Bettany leaps off of stones thrown by Maggie Q while the stones are in mid-air -- VERY cool (if absurd, but let's not go there.) What I wanted was for them to do this trick again, maybe in a new way, maybe with Maggie Q doing the air-walking while Paul Bettany threw masonry, but nope.

It might serve my case better to simply say that the neat setting, great actors, solid fight choreography, and fantastic cinematography all added up to "meh" for me. 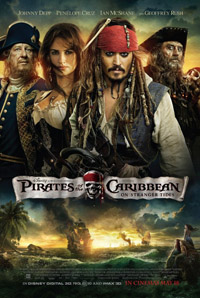 Pirates: neat imagery, cool combat stuff, and I left the theater thrilled with the movie. I had a great time. The difference? When you see something cool, expect it to also be something important.

The other difference? I saw On Stranger Tides with Sandra. Seeing movies with her is fun. And that's probably why Pirates of the Caribbean: on Stranger Tides is my favorite film of the year, at least so far.

On Stranger Tides won't displace Curse of the Black Pearl as my favorite entry from the PoTC franchise, but it's a much more entertaining film than Dead Man's Chest or At World's End (if equally absurd, but again, let's not go there.)

One word of warning, though: your small children may not sleep well, or ever go swimming again. Mermaids are scary.