Today is International Pixel-Stained Technopeasant Day. This is the day when celebrants post works for free online, originally in reaction to a kerfluffle of sorts over at the SFWA in 2007. I don't have a list of this year's participants, and it's possible the movement has lost steam over the last 48 months given the fact that lately every day is Pixel-Stained Technopeasant Day. When can you NOT find great writing and art freely provided online by professional writers and artists? I recently read three fantastic non-fiction essays over at Baen's Universe. I donated, but I didn't have to. At any rate, my participation in the event today is nothing new. It's just another daily installment of Schlock Mercenary. I suppose I could opine and ramble about what this means, and whether it's a good thing or a bad thing. Am I destroying the economy, or am I rebuilding it? Or am I somehow doing both, serving as an agent of the democratized remodeling of the world of publishing? I don't know. And regardless of my current thoughts on the matter I'm sure the historians and the economists will settle the matter over drinks in a decade or two. 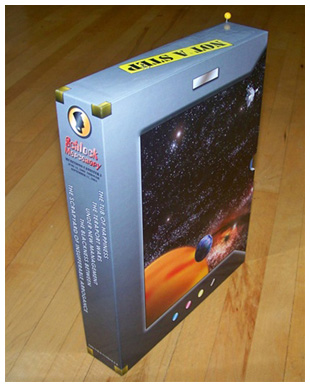 Yesterday we got the advance copies of The Scrapyard of Insufferable Arrogance along with six advance copies of the slipcase, Schlock Mercenary Munitions Canister I. I took the Munitions Canister (slipcase) with me to the Keep where it was unanimously received as attractive and (once handled) "really STURDY." When I put the "Not a Step" sign on the top of the design I thought I was being silly. Now, however... I think that box might just work as a step-stool. But it's clearly labeled to prevent you from doing that. Boxes and books are on their way to Schlock HQ, and are due to arrive in about four weeks. The launch party is at CONduit in Salt Lake City, and the shipping party is going to be about a week later. If you've pre-ordered, you should receive your package in early June. If you haven't pre-ordered it's not too late! We can still make at least 100 boxed sets of books before we run out of Under New Management.