I took a serious break from sketching today. After 70 books (less than a third of yesterday's output) I booked a double-feature. The first of those films started at two PM. The second, Prometheus, started at four. 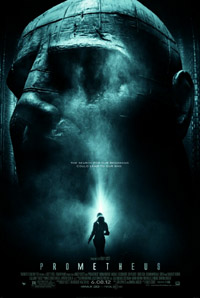 My Prometheus experience may have suffered a bit from me being tired. Then again, I was too tired to ask the movie hard questions about its plot-holes.

I'll confess, I was worried because I don't much like horror films, (I'll make an exception for good science fiction), but as it turns out Prometheus isn't exactly a horror film. Okay, there is this one moment that (after I described it) put the movie firmly into Sandra's "must not see ever ever forever for real" category. I'll post a spoiler in the comments.

Upshot? I had a lot of fun. The visuals were amazing, and really brought that sense-of-wonder that I feel good science fiction demands. The story was pretty straightforward -- discover, explore, get eaten by monsters, prevent annihilation of Earth, roll credits -- which isn't bad when you're tired, but rendered the film fairly predictable to anybody who knows it's a prequel to Alien (or perhaps a prequel to a reboot of the franchise, which would patch a couple of holes.)

So I left the theater happy, and the film took a comfortable 6th-place slot for me for the year.

But I was too tired to ask the hard questions. The hardest? "How could it have been better?" I've read Jack McDevitt's The Engines of God, and that is some fine science fiction archeology. Prometheus needed more of that, because frankly, the archeological clues that point our team to this world are paper-thin at best. Erich von Däniken could have done a better job drawing a map to the home world of our supposed celestial forebears.

I suppose they gave that a miss because this isn't an archeology story. This is yet another retelling of the sci-fi fable in which researchers dig, poke, prod, or otherwise investigate with insufficient caution and nearly end the world. I'm sure it has a name, but to find it I'd need to look it up on TV Tropes, and I always shave hours off of my life with those trips. (You'll note I didn't even link the site this time. Thank me in three hours when you've been doing something BESIDES reading TV Tropes for three hours.)

My friend Alan was pretty disappointed by the film. Part of my enjoyment of the movie was derived from discussing it with Alan, Joey, and Jared afterward. As it turns out, Alan wanted more of what the original Alien gave us -- Giger-designed xenos jumping out and eating face when we're least expecting it. This movie gives us almost none of that. I still found it satisfying, but if you're hoping for acid-bleeding, long-headed killing machines you should probably re-watch something from earlier in the franchise.

The biggest hole for me? Those progenitor-esque aliens our heroes went looking for obviously had some sort of plan for the technology they left behind. At the end of the film I still didn't know what it was. Their behavior doesn't make sense. Maybe this is setting us up for a sequel, or a franchise reboot, or long hours of satisfying discussion with like-minded friends at science fiction conventions. I don't know.

Regardless, if there's another one of these I'll probably go see it.

[Update: Apparently there was a key bit of dialog between Shaw and the Captain that I missed while voiding my bladder (an activity I completely forgot engaging in -- my review is flawed!) The moral of the story? If you see two movies in a row, pee in between them.]