I've read several debut novels over the years, most by authors who've gone on to do quite well for themselves, and I can confidently state that Promise of Blood, by Brian McClellan, is the best of them. 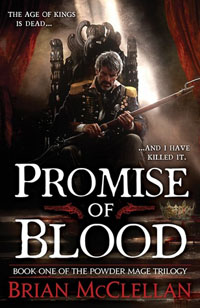 By the end of the first chapter I was hooked. By the third point-of-view switch I was amazed. McClellan was juggling characters like an old hand, and this was supposedly his first book. He was drawing me into his mythos and world without lengthy exposition, moving seamlessly from action to dialog and back, teaching me what to expect from this world he created, and I never felt "taught." Only entertained.

That takes real chops, that does. Many writers don't develop that level of skill until their five millionth word, if ever. And McClellan does it straight out of the gate.

Also, he created a fantasy world with gunpowder, magic, and "powder mages." It's right there on the cover. Setting is not story, of course, but McClellan hooked me with both.

Funny story, now: I was at Legendary ConFusion, and Brian McClellan was one of the authors with whom I was hanging out. The others, including Myke Cole and Peter Brett, were talking up Brian's book, which was (and still is, as of this writing) on sale. So I snagged it for $2 thinking "what the heck?"

Then I saw Brian in the Reddit Room, and he had a mousepad I recognized. It was ancient, with the wrist-grime of ages upon it, and it didn't take me much mental math to figure out that Brian had been a Schlock Mercenary fan since long before he was published.

Let me be up front about something: if you like my work, that's no guarantee that I'll like yours, let alone blog about it this gushingly. But when I dove into Promise of Blood I realized that this was epic fantasy written straight at my particular tastes. And you, fair reader, should take careful note of this, because if you like the things that I make (a fair bet, considering you were here on the site, and found this blog post) I think you're extremely likely to enjoy what Brian McClellan has written. And will yet write.

Two bucks, folks. It's still on sale, and I think you should get in on the ground floor.