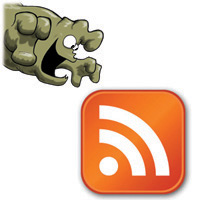 Schlock Mercenary has finally embraced the promise of its premise and stepped into the twenty-first century. There is a Schlock RSS feed, which includes the strip, footnotes, and navigation buttons, and which can be consumed just about any way you want to consume it. As an avid LiveJournal reader let me point you at this link here where you can "friend" Schlock Mercenary and use LiveJournal's comment system to discuss the strip.

The feed comes just in time, too. On August 28th Schlock Mercenary will be celebrating strip number 3000 after 3,000 consecutive days of no missed updates, no fillers, and no guest strips. That's just two weeks from now.

I needed SOMETHING to brandish jubilantly, and an RSS feed will do. Although now that I do the math, I may have advance copies of Schlock Mercenary: The Teraport Wars to brandish as well. Throw in a few party hats and I'll be all set.

And now, the FAQ:

Q: What about ad revenue? There are no ads in the feed!
A: There is a "buy Schlock stuff" button under the comic. That ad pays really, really well.

Q: No, seriously. Aren't you going to lose ad revenue from this?
A: I'll let you know. I don't think so, though.

Q: What isn't included in the feed?
A: Well... it's got the strip, it's got footnotes, it's got five buttons and two links to get you to appropriate places on the site... I'd say it has everything, but I know I've forgotten something.

Q: Why did this take so long? What were you waiting for?
A: I thought that RSS had to be built in to my updater engine. This thought was shared by both of the two engineers I challenged with the project. This made it look daunting, to say the very, very least, and progress was glacial. The updater is scary. Fortunately a bright guy named Mark Shieh came along and volunteered. He pointed out that the whole thing could be built independently. Then he went and DID it. When I dared to say that it was great, he could stop, and I'd wait for updater engine changes before getting my "perfect world" feed, he rolled up his e-sleeves, dug back in, and made my "perfect world" feed. It didn't take long. It took about three days. But we waited about three YEARS before properly starting the project.

Q: When will we see attorney drones again?
A: Right now, if you go re-read the archives in the correct places.

Q: When will Schlock Mercenary: The Teraport Wars be available for pre-order?
A: At the end of this month. I'm waiting until I have advance copies in my hands.

Q: You're just making up questions now, aren't you?
A: I'm trying to anticipate you people. It's harder than it looks.