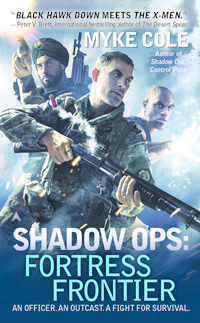 Myke Cole's new book, Shadow Ops: Fortress Frontier, is everything I hoped for, right down to the part where I was hoping he could surprise me and still fulfill the promises made in Shadow Ops: Control Point. He succeeded! I was surprised!

I acquired the first book in the series, Myke's debut novel Shadow Ops: Control Point as a gift from Myke when he and I met in New York at Lunacon last year. I loved it, and reviewed it here. (Note: I also bought a copy, because that's how I roll.) Here's a quote from that review:

...It’s like if Tom Clancy decided to write urban fantasy. It’s what you’d get if Jason Bourne and a college-aged Harry Potter had to team up to win a much more realistically world-built version of The Hunger Games... Late last year Myke generously gifted me with an electronic version of the page proofs for Fortress Frontier, which I finished reading on the plane home from Yologast. The series remains compelling.

That's not fair. The series is like going back to my favorite restaurant, discovering new things on the menu, and realizing that I may never pay money to eat anyplace else again. I like the characters more than I used to, I love the new characters, and I want to devour the magic system like it's a long plate of all my favorite nigiri sushi. This is great military fiction, and great fantasy, and now I'm hungry.

The fantasy element is very much like science fiction. The magic is following rules the same way all of the military technology in the book adheres to the laws of physics (and Murphy.) Myke's work is a great illustration of Sanderson's First Law of Magics, which states that an author's ability to solve conflict with magic is DIRECTLY PROPORTIONAL to how well the reader understands said magic. I'm not going to cite examples from Myke's work because I don't want to spoil it for you, but Sanderson's First Law of Magics explains why Gandalf doesn't resolve conflicts in The Lord of The Rings, but Vin uses all kinds of magic to resolve conflict in the Mistborn trilogy.

Myke knows how this principle works, and does a very satisfying job of presenting the magic for us in a way that makes us accept it as "real." It follows rules, and those rules suggest applications and exploits that are thrilling to watch unfold.

Shadow Ops: Fortress Frontier releases in about a week, on January 29th. Sure, I got my copy for free, but I'll be buying it because that is how I roll.