No, Snow White and the Huntsman is not a full three hours long, but at 127 minutes it's definitely too long. I could have better spent the combined travel and viewing time taking a nice nap.

To summarize: this film is a beautiful, well-executed disappointment. 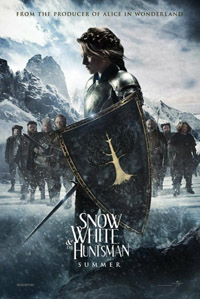 In more detail: Kristen Stewart was unconvincing, the shaky-cam action ruined what could have been some great fight scenes, and holy crap it was too long but I already said that. Charlize Theron was fantastic, even when screeching the "you cannot defeat me" cliché. The dwarves were so brilliantly created it was distracting (Nick Frost's head on a dwarven body? HOW DID THEY DO THAT?! I CANNOT SEE THE SEAMS!!) and the troll we see in the trailers was apparently so expensive they couldn't afford to write a story that uses it more than just the one time.

Oh, and Kristen Stewart's "rally the troops" speech was the worst example of that particular story element that I can conjure up. Bad writing, bad delivery, bad camera angles... it was as if the filmmakers deliberately undermined the moment so we'd be surprised when people decide to follow Snow White into battle. They'd have been better served by having Kristen Stewart simply walk through the camp in her nightgown asking for armor, a sword, and a horse, gradually attracting a crowd as she goes. It would have been easier on the actress, and more in line with what she can convincingly do with her voice.

My harping, it continues: I'm trying to imagine a set of circumstances where a group of professionals make a scene that bad and decide to put it in the movie anyway. The troop-rallying scene exists, so the circumstances that led to it must also exist, but I cannot fathom them.

My 17-year-old daughter really wanted to see this movie. Afterwards she bemoaned the film's failure to use any of the "pretty" stuff in the conclusion. Good point! Snow White can commune with the fey? Fairies, moss-turtles, the White Stag, and what about that troll? Maybe THAT should be how the witch's magic is unraveled, rather than through somebody supposedly (but not convincingly) prettier than Charlize Theron giving the witch a good stabbing.

Please note: I'm not suggesting that Kristen Stewart is not pretty. I'm saying that if you've decided to tell a story in which a spell is done (and undone) by virtue of one person being magically, unequivocally, and by some standard objectively "fairer" than another, you need to work that angle HARD. Casting, lighting, make-up... then address the audience's differing standards for beauty with some storytelling devices to get them on your side regardless of how they feel about brunettes.

There were things to like. The poison apple scene was well done on all accounts. The witch made out of crows was a superb and memorable effect. I loved the dwarves, the stag, and the troll.

This one's near the bottom of my list for the year. I had high hopes for it (but not high expectations), and it was quite gorgeous, but ultimately it falls into the "disappointing" category.