The trademark in question? "Space Marine."
Lots of people, myself included, made varying types of social media noise regarding the matter. Amazon has since seen the light, and reinstated M.C.A. Hogarth's book. (I can't vouch for it. I haven't read it.)
I've got lots to say on the matter, but let's begin with the water war.
Tolkien, Heinlein, H.G. Wells, and others are the well-head. They are the font from which much of the terminology of genre fiction derives. That water flows freely downriver, eventually irrigating fields, flooding paddies, moistening whatever metaphor you'd like.
Gygax, Arneson, and others drank deeply from that stream, and contributed to the flow by giving us tabletop games in which our own imaginations could run freely.
Games Workshop, located even further downstream, drank even more deeply, taking terms like "elf," and "dwarf," and building an entire gaming universe of war games, skirmish games, role-playing games, and more.
But now they're building a dam. If you're downstream from Games Workshop, they want you to thirst to death unless you pay them money.
What would have happened if Tolkien or Heinlein had built a dam? Games Workshop would not exist. Their entire business model hinges upon the collaborative imaginations of hundreds of thousands of people, all sharing a vernacular in which words like elf, dwarf, ogre, empire, and orc call up instant images. " Eldar" didn't mean "ancient elf" until Tolkien said it did. Games Workshop drank that right up. Bob Olsen and E.E. Smith both used the term "Space Marines" back in the 1930s. Games Workshop sucked on that, too.
I understand the importance of trademarks, which allow Games Workshop to protect their business from copycats and counterfeits, but there isn't much moral high ground to be found when the terms being trademarked are themselves borrowed from others.
The solution, as I see it, is for Games Workshop to rename their generic, bulbously-pauldroned Space Marines to something they CAN trademark. They release codexes often enough, this shouldn't be a problem. Let them screw their customers (again,) instead of putting the screws to the rest of us.
But the rest of us should consider adding to the flow, instead of just drinking. 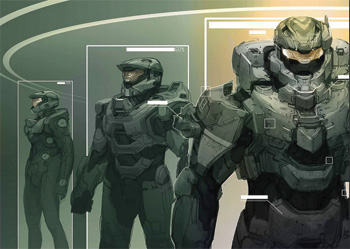 Hogarth could have done better than to call anything in her book a "Space Marine." Sure, the term has been in use since the 1930s, but if we look at modern examples, we find that other terms work better. Master Chief is technically a Space Marine, but we know him as a Spartan (also difficult to trademark, but still much better.) "Space" anything is kind of cliché. Stormtrooper and Spartan are taken (both terms borrowed from history) but should serve as examples of how far afield we can go for meaningful new words.
How about " Magbooter?" Craft the right two sentences of context in your story, and we'll know that a magbooter is an armored soldier on a spaceship who is expected to board other ships, and whose magnetic boots are a signature piece of equipment.
That one's free, folks. Take it! (I Googled it just now, and got jack.) 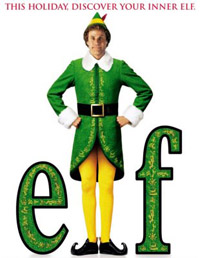 If you're writing about elves, dwarves, and orcs, have you asked yourself why? If your elves are different, could you call them something else? Are the tall, pointy-eared forest-dwellers in your story because you think they're required for it to feel like fantasy? Can't they just as easily be monkey-people, with tails and dextrous feet with reversible thumbs? Or maybe they're an ancient race, elegant and mysterious, and they manifest ethereally, with a mask totem being their only physical element.
Sure, you can't avoid borrowing something from those who have gone before. Just the idea of forest-people has been around since Flash Gordon (at least,) so the concept alone isn't original. But what you do with it SHOULD be. Why bother using the word "elf?"
In my own work I've borrowed heavily. I admit it. "Uplift," for example, comes to me from David Brin, who re-purposed it from its obscenely racist 18th-century African missionary usage. Doctor Brin and I have talked about this. He's happy to pay it forward and contribute to our colloquia, and I'm not going to try to title any of my books with that word because that would confuse the market.
Then there's the term "Annie Plant," which is uniquely my own. It's short for "Annihilation Power Plant" (not "antimatter power plant," as I'm asked to explain a lot) and I like the way it makes my universe feel like MY universe rather than somebody else's. I'm not going to trademark "Annie Plant," but I don't think you should use that word. Come up with your own! Be creative!
Ultimately, our speculations and flights of fancy will have common ground somewhere in the language we use. We should be willing to share that ground, watering it collectively where necessary, but taking care to differentiate.