My friend Nick from Elitist Book Reviews was the first to link me to a Sucker Punch trailer, and since that moment it has been the movie I have been the most interested in seeing. 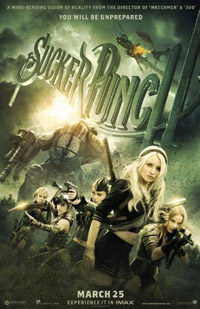 I'm not going to review anybody else's review, but I do need to acknowledge the fact that the film is getting a mixture of down-turned thumbs and absolute vilification. I haven't read any of these, but it's hard to miss the tenor of the conversation when you're surgically attached to the Internet.

This is not necessarily a recommendation that you see it, however. The action sequences in the trailers may make it look like the sort of blockbuster fare that goes well with a side of popcorn, but that's not what this film is. Those neat action sequences are all layers of abstraction that our heroine has placed over the injustice, the evil, and the horrors that have befallen her. And they are not so abstract that you cannot figure out what is happening to her and the other girls in the real world, though you might have to pay attention to figure it all out.

And your reward for paying attention? "Oh, that's horrible!"

This film was not what I hoped it would be (I secretly wished for an Urban Fantasy), but it also was not what I feared it would be. The concatenation of the words "sucker" and "punch" had me worried that this was going to be a cross between Pan's Labyrinth and Million Dollar Baby, and that I was going to go home feeling like I'd been tricked into witnessing something horrible by a director who waited his whole life to sucker a bunch of fans of escapist media into sitting through a painful session of hardcore moralizing.

Okay, maybe that's what actually happened, but if so it wasn't nearly so painful as I expected.

Has it earned the awful reviews? Absolutely. But I believe that most of what you get out of a movie (or a book, or a comic, or a song) is a reflection of what you brought with you into it. This film will, by nature, reflect in such a way that some people are simply going to HATE it.

I'm happy that I'm not one of them. I had a great time at the movies this afternoon.