I'm not entirely sure what the Pants of Reality are for, but if you don't have good Suspenders of Disbelief then The A-Team will leave those pants around your ankles and, to paraphrase Patrick Warburton,"stare at your dangling unmentionables." 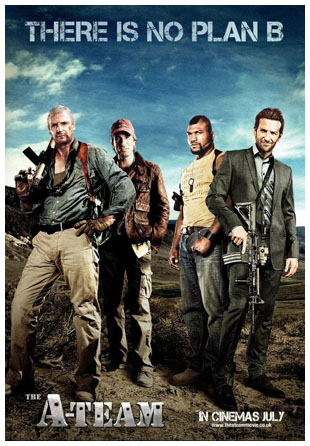 I loved this film. I laughed. I cheered. I growled. I almost considered allowing myself to tear up, but fought that one back successfully. In short, I had a blast at the movies this morning. The A-Team is, as of this writing, my new #2 for 2010. The sad irony implicit in my use of the picture to the left is that it's from the UK ads for the film, and in the UK the film doesn't release until next month. So in this brief review I'll try not to spoil anything. First: this is as close to a comic-book movie as you can come without being an actual comic-book movie. The action is over-the-top and absurd, but it's couched in such a way that if you're willing to suspend your disbelief you'll have a great ride. If you can't believe that (for instance) heat-seeking missiles will miss a helicopter the moment the engines are cut, this movie will lose you about five minutes in. It's not as bad as 2012 was in that regard, but it comes close. In both movies our heroes survive riding a vehicle out of a moving aircraft. Second: If you're worrying about the plot structure based on things you've seen in the trailers, relax. This is an origin story that does all kinds of justice to the original programme. (Spelling it "programme," when my UK friends can't see the movie yet? That's irony of the cruel variety.) Third: Yes, this is more violent than the original A-Team series, but so is any episode of Tom & Jerry. Don't worry, though. Hannibal and his companions have not been rewritten as warmongering butchers. They're still schemers whose best plans involve as little killing as possible. So little, in fact, that this movie might still yank your pants of reality in some direction or another. You could end up with the Wedgie of Sanitized Violence, which, as wedgies go is kind of nice because at least it's CLEAN. Fourth: The actors got it right. Hannibal, Face, B.A., and Murdock were all true to their small-screen selves, while at the same time being appropriately re-imagined and for a bigger screen. They all delivered, and they "sold it" in ways that the original actors never did. Yes, I watched a few episodes from Season 1 and Season 2 in preparation for this. I like the movie better. Beyond that? Well... it's an action movie with improbably-imagined physics, unlikely conspiracies, and highly fictional portrayals of prisons, banks, Mexico, and the military. But I don't usually spend my entertainment budget on documentaries. Those are for research. This was for fun, and I had lots of it.