The Hobbit: The Battle of the Five Armies
Tuesday December 23, 2014 • Howard Tayler 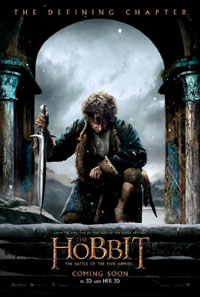 If you didn't enjoy the first two installments in Peter Jackson's Hobbit franchise, you probably won't like this one, either, because it doubles down on everything.
If you did enjoy them, this one pretty much sticks the landing. There were bits I didn't like much (the Sauron/Necromancer "Jefferson Airplane" visual tops that list) but this didn't feel overblown or too long. It felt huge, and justly so.
Tolkien tells us that there are battles in Middle Earth.  Jackson shows them to us. Tolkien tells us that there are thirteen dwarves in the party. Jackson shows them to us. Tolkien tells us that Laketown gets burnt by a dragon, and the survivors become refugees. Jackson shows us all that. The list goes on--The Hobbit is a short novel (by the standards of epic fantasy) because Tolkien does a lot of telling in between the showing. The Hobbit trilogy of films is a long movie (by the standards of genre-fiction films) because Jackson expands on the tells to give us a big show.
In order to make any of that engaging, we need to be seeing it through people with whom we identify. This is why during previous films we're introduced to Legolas and Tauriel, Bard's children, Azog, and the whole host of other named characters.  Each of the dwarves is his own distinct character, and Laketown is full of the faces of human people who look like they could be our neighbors.
I'm down with all of this. In fact, I'd be quite happy to see the trilogy with an additional 90 minutes of footage, because some pieces felt a bit short.
My biggest complaint (aside from the 60's music-video effect for Sauron) lies in the fact that some of the lines I remember from the book weren't in the movie. But without the book I wouldn't have noticed. So, yes, the purists will again be frustrated.
My second-biggest complaint is that I think these films are best appreciated across three nights with the same group of friends and/or family, and that's not how I saw them. If you haven't seen any of them yet, renting the first two and then seeing the third might be downright delightful.
I saw the HFR 3D version, and it was gorgeous. No shaky-cam! And Middle Earth looked real enough to walk right into. Also, I don't want to walk into this part of it. Five is at least four too many armies.
The Hobbit: Battle of the Five Armies clears my Threshold of Awesome, and comes in at #6 for me for the year, just behind Godzilla.
(cross-posted from howardtayler.com)