The Last Airbender May Be The Last Shyamalan
Saturday July 3, 2010 • Howard Tayler

My Twitter review of M. Night Shyamalan's silver-screen version of The Last Airbender reads as follows: 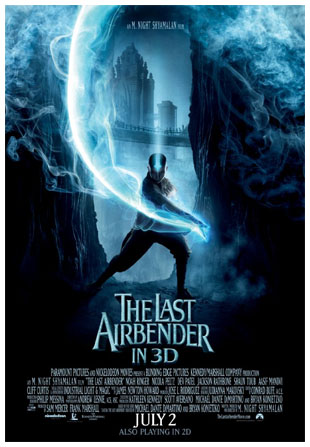 Ordinarily I'll brush aside the movie complaints from fans of the original franchise because a cinematic treatment is always going to be different from the source material, and this is always going to upset people. In this case, however, the complaints are valid, and can be summed up as follows: "If you're going to put [fun element from the anime] in the movie, you need to do it RIGHT." Keliana, with whom I saw the film, lectured me at length on this after the movie.

This complaint is valid because it's half the reason the movie was so bad. Shyamalan tried to put too much fan service into it, but there wasn't enough time to do any of it especially well.

Usually when I see a film that doesn't work in some way I will allow for the fact that the filmmakers have a difficult job that I do not fully understand. In this case, however, many of the mistakes were so egregious that I, a non-filmmaker, honestly feel like I could have done better. This is why I think this may be "The Last Shyamalan." I can't imagine the people who hire directors looking at this film, seeing the byline which states the film was "written, directed, and produced by M. Night Shyamalan," and deciding to ever give him responsibility over the disposition of their particular intellectual property. Or money. Or a camera.

Did I enjoy the film? A little, yes. It was visually delightful (in 2-D*) with neat action sequences and (huzzah!) no shaky-cam. But it was ultimately disappointing, and that drops it to just one notch above the absolute worst thing I've seen all year - Legion. I will allow, however, that it's a pretty good sized notch.

Obligatory social commentary: much ado has been raised regarding the race of the characters in this film. Honestly, I believe that was the absolute least of this film's problems. It may well be the greatest societal problem of this film, in that it reflects tastes and attitudes about race that could use some fixing in Hollywood (and among Hollywood's customers, yes that includes you and me) but the only place where it really stands out is when we're asked to believe that the blue-eyed white folk are actually from the same tiny, icy village as all those beautifully brown, epicanthically folded Inuits. Other than that? I didn't notice race much. I was distracted by the lame movie.

In its defense, the film is trying to tell a beautiful story, and succeeds in a few places. The Last Airbender is an epic tale full of fantastic "hero's journey" and "coming of age" elements, with romance, action, betrayal, tragedy, self-discovery, and sacrifice, but if this sentence gets quoted partially on a DVD box somewhere I will SCREAM because finding these elements is like digging for salad in a sink full of potato peels and I don't want anybody seeing this film without knowing that. Great story, crummy storytelling. That's hard to do, but Shyamalan did it.

Sorry. That last paragraph was supposed to be in defense of the film, but I got distracted by the thought that someday, somebody might quote me on a DVD box.