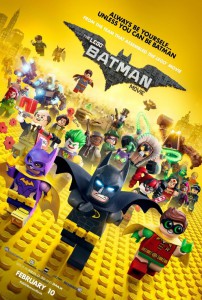 While it did not quite make it across my Threshold of Awesome, The Lego Batman Movie was plenty of fun, and had lots of awesome moments. It’s something I’ll probably want to pick up on Blu-Ray, because there are plenty of amusing, fannish, and/or Easter-eggy things going on in the background, and those are usually good for a couple of re-watches. At least for me.

The opening romp¹, in which our hero is awesome and makes it look easy, is possibly the most over-the-top action movie romp ever. Possibly. I hadn’t realized this was something for which I would want to be keeping score.

Unlike The Lego Movie, The Lego Batman Movie does not have live-action stuff happening outside the fourth wall. I’m not sure how I feel about that. Those scenes made The Lego Movie work for me², but I know they threw a lot of other people out of the film. I share this not as a spoiler, but as a meta-unspoiler. Don’t sit there waiting for live action moments to explain in-Lego plot points. You might be able to headcanon³ a few such moments (I know I did) but that’s always a perilous path to walk, since you’re putting things into the movie that the director did not put in.

¹ By my definition, the Romp is the Act I scene in an action/adventure film in which we see our hero(es) being competent and successful. It is used to make promises about the kinds of action we’ll see later, and it sets the bar for what our hero is capable of. Some films do it really well (Mission Impossible: Rogue Nation) and some do not (I won’t name names here.)

² The Lego Movie placed #4 on my 2014 list, and totally crossed my Threshold of Awesome.

³ “Headcanon” is usually a noun, but verbing it makes total sense to me.