Let's get this out of the way: this film is going to sell a lot of Legos. 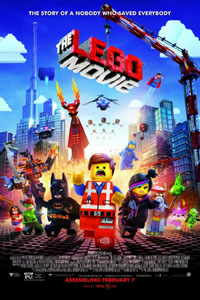 I'm okay with that. I had a great time at the show. The animation was wonderful, the story was the sort of over-the-top goofy/awesome stuff that you'd expect from the mind of a clever 10-year-old, and they hung a lantern on that. Liam Neeson and Morgan Freeman were voicing caricatures of some of their most memorable parts, and they did so with scenery-chewing abandon.

There were jokes meant for the grown-ups (or at least for those with a couple of decades of pop-culture immersion) and there were moments meant for the kids. And the ultimate peril these Legos face, well... it's perilous, and believable in spite of all the silly.

It's a Warner Brothers feature, so Lego Batman gets plenty of screen time while Lego Star Wars only gets a cameo, but you probably wouldn't notice the IP ownership boundaries without someone calling attention to them.

The Lego Movie holds my #1 slot for the (admittedly quite young) year. Convention travel makes it unlikely I'll be able to see it again with my 10-year-old, and that's going to save me a ton of money on popcorn and bricks.

Belatedly, I figured out how to articulate something important: I'm okay with this movie as a commercial for Legos, because it was also sort of a Public Service Announcement for Legos. Sure, there's product placement, but there's also a whole lot of message about why this toy is such an important part of so many people's lives. That may sound heavy, I know, but it's definitely in there, and I'm definitely okay with that.