Before I go on with the irregularly-scheduled movie review, pre-orders are now open for The Body Politic!

Okay, let's get this over with: The Lone Ranger was not a very good movie.

The individual pieces were competently created -- brilliantly, in some cases -- but the whole package left me exhausted and unhappy, which is, I'm pretty sure, not the effect the film's creators hoped The Lone Ranger would have on audiences. 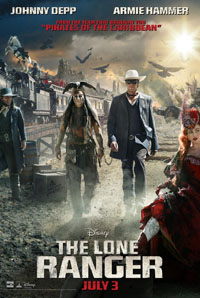 I went into the film thinking that the most egregious of the film's sins, casting Johnny Depp as a Comanche, would throw a long shadow over the whole movie, but that it would be awesome fun in spite of that and I'd feel guilty enjoying the whitewashing.

As it happens, Johnny Depp's Tonto cast a long shadow over a film that was too long, too violent, too silly, too long again, too slow, too fast, and then more of too long for me to enjoy it.

(Long Note: I am aware of the news posts indicating that the Comanche Nation was involved with the film, and was fine with it. The performances of the actual Native Americans in the film were wonderful, and made me long to see those actors better utilized. Am I allowed to be offended by what I believe to be racism when members of that race are not offended? That's the wrong question. The RIGHT question is "should a movie in which racial and cultural conflicts are an implicit part of the story leave me concerned about racism implicit in its very production?" The answer to that question is "no, it should not." That concern takes me out of the story. It breaks the fourth wall.)

So, aside from the fact that Johhny Depp's performance can best be summed up as "Captain Jack Sparrow does a white-washed Comanche send-up of The Magical Negro," what didn't I like?

First, we've got two inciting incidents, and the one we're really waiting for -- the one in which our hero is adopted by and rescued by his Spirit Animal -- happens an awfully long way into the film. The first one, where the bad guy escapes and causes a big train wreck, is cool, but OH THE AGONY of waiting for the film to get on with itself for another half hour.

Second, the film shifts tone far too quickly. The battle in which hundreds of Comanche are killed, deepening the treachery of those against whom The Lone Ranger must pit himself, is horrific. Fitting for a historical piece about how the American West was won, but that's not The Lone Ranger. Fans of the source material are expecting a fun superhero film with horses, six-guns, and steam engines. How does the film switch between the grim and the fun? Tonto tells a joke about Silver not thirty seconds after watching the remains of the Comanches drift down river.

Third, it's just too long. At some point I suspect someone realized they had a tone problem, and decided that making the film longer would allow them to keep both poles. A better decision? Cut one of them, and make a tight movie.

That said, the action was over-the-top wonderful, and the film was very, very pretty. As I pointed out earlier, pieces of this film were brilliantly created. The whole, however, fails to stand as tall as the sum of the parts. When I began this overlong review with the phrase "okay, let's get this over with," that's kind of what I was thinking halfway through the big action finale. Ungh.

Should you see it? I don't know. Lots of people in the audience were cheering and laughing, but none of them were me, and I kept imagining myself asking them "why are you laughing? DID YOU NOT SEE WHAT JUST HAPPENED?" Yes, I'm perfectly capable of enjoying a stupid movie (case in point: Hansel & Gretel) but I just couldn't enjoy this one. The Lone Ranger rocks the nigh-bottom of my list for the year, well below the Threshold of Disappointment.